Detail from plate 12 showing the name "Ani, The Scribe" in a different hand.  Please click to view entire image.

Detail from the Papyrus of Ani, showing Ani and his wife entering at left.  Please click to see complete image. 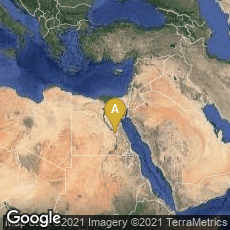 It is doubtful whether any book trade, as we understand the term, existed in ancient Egypt because literacy was limited to an elite group, chiefly scribes and priests. Instead information was transmitted by oral tradition or proclamation. It is believed that a small number of literate people may have personally copied texts that they needed. Only copies of the Book of the Dead, a funerary text used from the beginning of the New Kingdom, around 1550 BCE to around 50 BCE, were written for sale.  Some copies of this work have the place for the name left blank, to be filled in later.  Close study shows that the name of the owner was sometimes written in by a later scribe with different handwriting, suggesting that these funeral papyri were maintained in inventory before sale.  It is thought that illiterate people also wanted to possess the Book of the Dead, which guaranteed protection against the dangers of the afterlife, in order to add it to their tomb furnishings.

"A Book of the Dead papyrus was produced to order by scribes. They were commissioned by people in preparation for their own funeral, or by the relatives of someone recently deceased. They were expensive items; one source gives the price of a Book of the Dead scroll as one deben of silver, perhaps half the annual pay of a labourer. Papyrus itself was evidently costly, as there are many instances of its re-use in everyday documents, creating palimpsests. In one case, a Book of the Dead was written on second-hand papyrus.

"Most owners of the Book of the Dead were evidently part of the social elite; they were initially reserved for the royal family, but later papyri are found in the tombs of scribes, priests and officials. Most owners were men, and generally the vignettes included the owner's wife as well. Towards the beginning of the history of the Book of the Dead, there are roughly 10 copies belonging to men for every one for a woman. However, during the Third Intermediate Period, 2/3 were for women; and women owned roughly a third of the hieratic paypri from the Late and Ptolemaic Periods.

"The dimensions of a Book of the Dead could vary widely; the longest is 40m long while some are as short as 1m. They are composed of sheets of papyrus joined together, the individual papyri varying in width from 15 cm to 45 cm. The scribes working on Book of the Dead papyri took more care over their work than those working on more mundane texts; care was taken to frame the text within margins, and to avoid writing on the joints between sheets. The words peret em heru, or 'coming forth by day' sometimes appear on the reverse of the outer margin, perhaps acting as a label.

"Books were often prefabricated in funerary workshops, with spaces being left for the name of the deceased to be written in later. For instance, in the Papyrus of Ani, the name "Ani" appears at the top or bottom of a column, or immediately following a rubric introducing him as the speaker of a block of text; the name appears in a different handwriting to the rest of the manuscript, and in some places is mis-spelt or omitted entirely.

"The text of a New Kingdom Book of the Dead was typically written in cursive hieroglyphs, most often from left to right, but also sometimes from right to left. The hieroglyphs were in columns, which were separated by black lines - a similar arrangement to that used when hieroglyphs were carved on tomb walls or monuments. Illustrations were put in frames above, below, or between the columns of text. The largest illustrations took up a full page of papyrus.

"From the 21st Dynasty onward, more copies of the Book of the Dead are found in hieratic script. The calligraphy is similar to that of other hieratic manuscripts of the New Kingdom; the text is written in horizontal lines across wide columns (often the column size corresponds to the size of the papyrus sheets of which a scroll is made up). Occasionally a hieratic Book of the Dead contains captions in hieroglyphic.

"The text of a Book of the Dead was written in both black and red ink, regardless of whether it was in hieroglyphic or hieratic script. Most of the text was in black, with red used for the titles of spells, opening and closing sections of spells, the instructions to perform spells correctly in rituals, and also for the names of dangerous creatures such as the demon Apep. The black ink used was based on carbon, and the red ink on ochre, in both cases mixed with water.

"The style and nature of the vignettes used to illustrate a Book of the Dead varies widely. Some contain lavish colour illustrations, even making use of gold leaf. Others contain only line drawings, or one simple illustration at the opening. Book of the Dead papyri were often the work of several different scribes and artists whose work was literally pasted together. It is usually possible to identify the style of more than one scribe used on a given manuscript, even when the manuscript is a shorter one. The text and illustrations were produced by different scribes; there are a number of Books where the text was completed but the illustrations were left empty" (Wikipedia article on Book of the Dead, accessed 05-06-2012).

In 1842 Egyptologist Karl Richard Lepsius named this class of papyrus when he edited papyrus Turin 1791 as an exemplar, and had it published in Leipzig in 1842 as Das Todtenbuch der Ägypter nach dem hieroglyphischen Papyrus in Turin mit einem Vorworte zum ersten Male Herausgegeben. This was the first printed edition of The Book of the Dead. The modern numbering of the Book of the Dead spells (BD 1-165) is derived from Lepsius's edition of this papyrus.