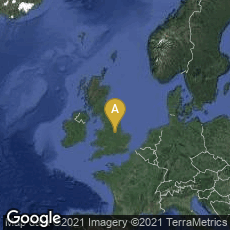 William Lee Invents the Stocking Frame Knitting Machine, the First Stage in the Mechanization of Textiles Front and End views of a knitting frame with captions of its various components from Felkin: A history of the machine-wrought hosiery and lace manufacturers (1867)

In 1589 William Lee of Calverton near Nottingham, England, invented the stocking frame knitting machine for the production of stockings. Framework knitting, as the use of Lee's machine in stocking production was called, was the first major stage in the mechanization of the textile industry, a process that 200 years later led to the Industrial Revolution.

"The machine imitated the movements of hand knitters. Lee demonstrated the operation of the device to Queen Elizabeth I, hoping to obtain a patent, but Elizabeth refused, fearing the effects on hand-knitting industries. The original frame had 8 needles to the inch, which produced only coarse fabric. Lee later improved the mechanism with 20 needles to the inch. By 1598 he was able to knit stockings from silk, as well as wool, but was again refused a patent by James I. Lee moved to France with his workers and his machines, but was unable to sustain his business. He died in Paris c.1614. Most of his workers returned to England with their frames, which were sold in London.

"The commercial failure of Lee's design might have led to a dead-end for the knitting machine, but John Ashton, one of Lee's assistants, made a crucial improvement by adding the mechanism known as a "divider".

"A thriving business built up with the exiled Huguenot silk-spinners who had settled in the village of Spitalfields just outside the city. In 1663, the London Company of Framework Knitters was granted a charter. By about 1785, however, demand was rising for cheaper stockings made of cotton. The frame was adapted but became too expensive for individuals to buy, thus wealthy men bought the machines and hired them out to the knitters, providing the materials and buying the finished product. With increasing competition, they ignored the standards set by the Chartered Company. In 1728 the Nottingham magistrates refused to accept the authority of the London Company and the centre of the trade moved northwards to Nottingham, which also had a lace making industry" (Wikipedia article on stocking frame, accessed 06-10-2012)