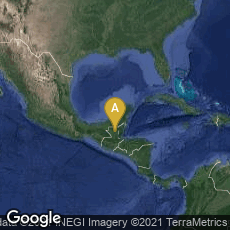 A Studio for Royal Mayan Scribes in the Ninth Century Angelyn Bass cleans and stabilizes the surface of a wall that shows the figure of a man who may have been the town scribe.Credit...Tyrone Turner/National Geographic.

In 2011 a small painted room was excavated at the extensive ancient Maya ruins of Xultun in the Petén lowlands of northeastern Guatemala, dating to the early 9th century CE. The walls and ceiling of the room were painted with several human figures, and scientists concluded that the room was a studio for royal scribes with "a taste for art and a devotion to the heavens as the source of calculations for the ancient culture’s elaborate calendars." Two walls also displayed a large number of delicate black, red, and incised hieroglyphs. Many of these hieroglyphs, written on the walls like we might write on a blackboard, howed astronomical computations, including at least two tables concerning the movement of the Moon, and perhaps Mars and Venus. Calculations of this type were central to Mayan astrology and rituals, in which astronomy was driven by religion. These writings, which are the earliest writing preserved in the Western hemisphere, may shed light on tables preserved in the Dresden Codex which dates from the 11th century.

"David Stuart, professor of Mesoamerican art and writing at the University of Texas at Austin, who deciphered the glyphs, said, 'This is tremendously exciting,' noting that the columns of numbers interspersed with glyphs inside circles was 'the kind of thing that only appears in one place — the Dresden Codex.'

"Some of the columns of numbers, for example, are topped by the profile of a lunar deity and represent multiples of 177 or 178, numbers that the archaeologists said were important in ancient Maya astronomy. Eclipse tables in the Dresden Codex are based on sequences of multiples of such numbers. Some texts 'defy translation right now,' he said, and some writing is barely legible even with infrared imagery and other enhancements" (http://www.nytimes.com/2012/05/11/science/archaeologists-unearth-ancient-maya-calendar-writing.html?hp, accessed 05-10-2012).

The "Dresden Codex," the Earliest Surviving Book Written in the Americas
Bishop Diego de Landa Orders Destruction of the Maya Codices
Rafinesque Deciphers the Mayan System of Counting
Origins of the Term Algebra