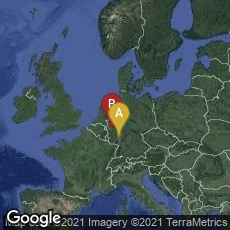 Between June 1469 and September 1470 printer Peter Schöffer of Mainz issued a broadside offering for sale 21 printed books issued from 1458 to 1469.

"Sixteen of the items can be identied as products of Schöffer's own printing workshop in Mainz, while the rest probably were printed by Ulrich Zell in Cologne. All the works listed are in Latin, beginning with the edition of Bible co-produced by Fust and Schöffer in 1462, followed by theological, legal and humanist texts as well as a treatise dealing with merchants' contracts. The 13th book title, which has been cut off this copy, was certainly the Psalter edition of 1459, whose printing types are reproduced in a sample below the booklist. A note added by hand on the lower margin of the page indicates that the bookseller could be contacted in the in 'Zum wilden Mann', probably referring to a locality in Nuremberg.

"The advertisement is characteristic for the early phase of organised book trade. The intinerant bookseller — seldom the printer himself — travelled with an assortment of books wherever demand was to be found, leaving printed lists with a handwritten indication of where he was staying, for potential customers, the latter being mostly members of universities or monasteries, but also other citizens with some education. Such book lists contained no prices, since these were to be negotiated between the bookseller and the buyer" (Wagner, Als die Lettern laufen lernten. Medienwandel im 15. Jahrhundert (2009) no. 77).

Only a single copy of this broadside survived, from the library of physician and writer Hartmann Schedel.  It is preserved in the Bayerische Staatsbibliothek, München (ISTC no. is00320950):

"It survived, albeit as binders waste cut in two halves and pasted printed side down on the inner cover of a manuscript (Clm 458) with astronomical-mantic texts which was owned by the well-known humanist of Nuremberg, Hartmann Schedel. At the end of the 19th century, it was discovered and removed from the book binding" (Wagner, op. cit.).

The final line of the book list reads "hec est littera psalterii" (this is the type of the psalter), a detail that has caused some to designate this as the first type specimen.

By 1500 Printing Presses are Established in 282 Cities
The Library of Hartmann Schedel, the Largest Private Collection of Books that Survived from 15th Century Germany, Remains Preserved in Munich
Ratdolt's Edition of Eusebius's "Chronicon" Contains One of the Earliest Acknowledgments of Gutenberg's Invention
Hartmann Schedel Publishes "The Nuremberg Chronicle," the Most Extensively Illustrated Printed Book of the 15th Century
The first illustrated edition of Ptolemy's Cosmographia, the First Book with Engraved Maps
The Overlap of Innovation and Tradition in the 15th Century Media Revolution