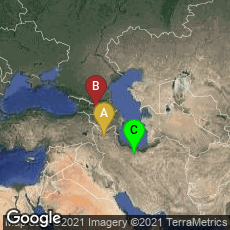 The First Lithographed Books Printed in Persia are Issued

"Illustrating lithographic books became a current practice in Iran as of 1263/1847.

"Shortly after the year 1270/1854, printing in movable type ceased altogether [in Iran]. For about two decades, all books published in Iran were produced by way of lithographic printing" (Marzolph, "A Projected Thesaurus Universalis Libri Lithographici Illustrati Persorum," Sadgrove (ed) History of Printing and Publishing in the Languages and Countries of the Middle East [2004] 27).

"What is certain is that in 1248/1832-33 a lithographic printing press began to operate in Tabriz. It was established through the efforts of Mirzā Ṣāleḥ Širāzi. In 1829, the equipment for the lithography and a printing specialist were presented as a gift to the Embassy of Ḵosrow Mirzā to Russia of which Mirzā Ṣāleḥ was a member (Rozanov, p. 225; Shcheglova, 1979, p. 31). The first books lithographed were the Qur’ān in 1248/1832-33 and the Zād al-maʿād of Majlesi in 1251/1836. The lithographer was Āqā-ʿAli b. Ḥājji Moḥammad-Ḥosayn al-Šarʿ Tabrizi (Tarbiyat, 1931, p. 450).

"In Tehran, the first lithographed item was, the newspaper called Kāḡaḏ-e aḵbār (lit. newspaper) published by Mirzā Ṣāleḥ in 1837. There were only three issues, and these came out in Moḥarram-Jomādā I 1253/May-August 1837 (Ṣadr-Hāšemi I, no. 37). As far as printing of books is concerned, the first publications are datable to 1838. These were the Noḵba of Moḥammad-Ebrāhim Eṣfahāni (Mošār, col. 1571), the Soʾāl o javāb of Majlesi (Ibid, col. 909), and the kolliyāt of Hafez (Tarbiyat, 1931, p. 453). It is possible, however, that the first lithographed book was the Qur’ān, as reported by Il’ya Berezin (1819-96) who visited Tehran in 1843 and met Mirzā Ṣāleḥ there (Berezin, p. 248). Berezin also noted that the lithographic press remained mainly idle.

"The first lithographic editions, as well as those typeset, were the work of printing enthusiasts who enjoyed the financial backing and patronage of such princely notables as ʿAbbās Mirzā in Tabriz and Manučehr Khan Moʿtamed-al-Dawla in Tehran. The number of published books remained therefore insignificant until the middle of the 1840s, when businessmen and booksellers began to realize the potential profits of the book printing trade. By late 1840s, there were already at least six lithographic printing houses at work in Tehran, and dozens of books were published (Shcheglova, 1979, pp. 33-34). From this time on, one can speak of regular lithographic book printing in Persia. The reasons for the success of the lithographic method of printing are obvious and well-known: simpler and cheaper equipment in comparison to that required for the typographic printing, availability of a large number of professional copyists, and the traditional culture of calligraphy. Although considerably less expensive than manuscripts, lithographed books retained the usual format of the handwritten codex in a sturdy binding. . . ." (http://www.iranicaonline.org/articles/lithography-i-in-persia, accessed 05-26-2012).