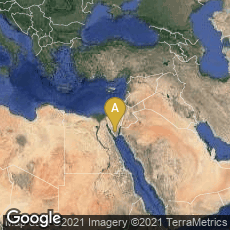 "St. Catherine’s Monastery is going digital. The monastery that claims to be the oldest in the world ­— not destroyed, not abandoned in 17 centuries — has begun digitizing its ancient manuscripts for the use of scholars. A new library to facilitate the process is about five years away.

"The librarian, Father Justin, says the monastery’s library will grow an internet database of first-millennium manuscripts, which up until now have been kept under lock and key. Should a scholar want a manuscript, they need only email Father Justin.

“ 'And if I don’t have book but see a reference, I can email a friend in Oxford. They can scan and send it the next day,' he says.

"Still, as natural and inevitable as it sounds, that’s quite the sea change. Just 10 years ago, bad phone lines made it hard to connect a call with the monastery. One hundred years ago, it took 10 days to travel from Suez with a caravan of camels. And when I arrive unheralded, having not even called ahead, a monk shades his eyes, shakes head and — at first — says he will not introduce me to Father Justin.

“ 'What if we said 'yes' to every reporter and scholar that came here? Everyone wants our time. But what about our own work?' he asks.

"Not many of the 25 monks cloistered at the Sacred and Imperial Monastery of the God-Trodden Mount of Sinai have email addresses, or operate Mac G5 computers, or know their megapixel from their leviathan. Father Justin Sinaites is a native of Texas. He wears a black habit and a beard to his chest, and ties his long hair back in a ponytail. He is over six feet tall. When he stands, he keeps his arms ramrod straight at his sides.

"Every morning he attends the 4:30 am service — which has not changed its liturgy since AD 550 — and then climbs six flights of stairs to his office in the east wing of the three-story administrative building forming the back wall of St. Catherine’s Monastery. He powers up the G5 and passes the morning making digital photographs of scripture written on papyrus, written on animal hide and written with ink made from oak tree galls.

“ 'It’s amazing, the juxtaposition,' is how he puts it.

"A page that may have taken a bent-backed monk weeks to illuminate is clamped under the bellows of the 48MP CCD camera. Snap. Next page. It takes three or four days to do a whole book. There are about 3,300 manuscripts. . . . "(http://www.egyptindependent.com/news/st-catherine-monastery-seeks-permanence-through-technology, accessed 05-29-2012

"The Ahmanson Foundation has awarded a major grant to the UCLA Library to fund key aspects of the Sinai Library Digitization Project.  This major project – initiated by the fathers of St. Catherine’s Monastery of the Sinai, Egypt, and made possible through the participation of the UCLA Library and the Early Manuscripts Electronic Library (EMEL) – will create digital copies of some 1,100 rare and unique Syriac and Arabic manuscripts dating from the fourth to the seventeenth centuries.

"A UNESCO World Heritage site located in a region of the Sinai Peninsula sacred to three world religions – Christianity, Islam, and Judaism - St. Catherine’s Monastery houses a collection of ancient and medieval manuscripts second only to that of the Vatican Library. Access to these remarkable materials has often been difficult, and now all the more so due to security concerns in the Sinai Peninsula.

“The manuscripts at St. Catherine’s are critical to our understanding of the history of the Middle East, and every effort must be made to digitally preserve them in this time of volatility. The Ahmanson Foundation’s visionary support honors the careful stewardship of St. Catherine’s Monastery over the centuries and ensures that these invaluable documents are not only accessible, but preserved in digital copies,” said UCLA University Librarian Ginny Steel.

“We are deeply grateful to The Ahmanson Foundation for its generous investment in this important project, and for its longstanding partnership with the UCLA Library,” Steel concluded.

“St. Catherine’s Monastery proposed a program to digitize its unparalleled manuscript collection, and an international team was assembled to help digitally preserve the ancient pages,” said Michael Phelps, EMEL director.  “EMEL is collaborating with the monastery to install world-class digitization systems, and the UCLA Library will host the images online on behalf of the monastery. The three-year project will digitize the monastery’s extensive collection of Syriac and Arabic manuscripts.”

"Built in the sixth century, St. Catherine’s Monastery holds the oldest continually operating library in the world. The library’s manuscripts cover subjects ranging from history and philosophy to medicine and spirituality, making them of interest to scholars and learners across a wide range of disciplines. Among the monastery’s most important Syriac and Arabic manuscripts are a fifth century copy of the Gospels in Syriac; a Syriac copy of the Lives of Women Saints dated 779 CE; the Syriac version of the Apology of Aristides, of which the Greek original has been lost; and numerous Arabic manuscripts from the ninth and tenth centuries, when Middle Eastern Christians first began to use Arabic as a literary language"