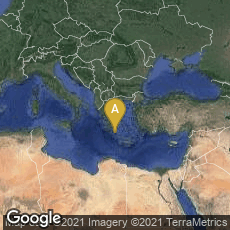 Discovered in 1967 by Nicolas Flemming and first mapped in 1968, the city of Pavlopetri, underwater off the coast of southern Laconia in Peloponnesos, Greece, is the oldest submerged archeological town site, and though the buildings were eroded over the millenia, the city is unique in having an almost complete town plan, including streets, buildings, and tombs. It is now believed that the town was submerged around 1000 BCE, and because the area never reemerged from the sea, it was neither built-over nor disrupted by agriculture. It has at least 15 buildings submerged in 3 to 4 metres (9.8–13 ft) of water. The ancient name of the city is unknown; the name Pavlopetri ("Paul's and Peter's", or "Paul's stone") is the modern name for the islet and beach, presumably named for the two Christian saints that are celebrated together.

Earlier, the ruins of Pavlopetri were dated to the Mycenaean period, 1600-1100 BC. Later studies showed an older occupation date starting no later than 2800 BCE, so it also includes early Bronze Age middle Minoan and transitional material.

The site is under threat of damage by boats dragging anchors, as well as by tourists and souvenir hunters. In 2009 John C. Henderson from the University of Nottingham and team began archeological work on Pavlopetri, to map the site in great detail using the latest technology. As a result, Pavlopetri became the first submerged town to be digitally surveyed in three dimensions using sonar mapping techniques developed by military and oil prospecting organizations. Because the archeologists collected 3D digital information in the survey process their data allowed a 3D digital reconstruction of the site by computer graphics professionals.