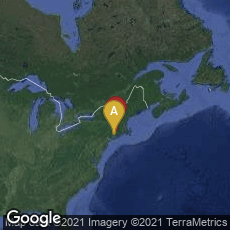 In 1806 American lexicographer, textbook pioneer, English spelling reformer, and writer Noah Webster published from Hartford and New Haven, Connecticut, A Compendious Dictionary of the English Language. In which Five Thousand Words are added to the number found in the Best English Compends; The Orthography, in some instances, corrected; the Pronunciation marked by an Accent or other suitable Direction; and the Definitions of many Words amended and improved. This small octavo volume was the first dictionary of American English. It was innovative in several ways: through the reform of spelling, through its guides to pronunciation, through its inclusion of etymologies, and through the modernity of its word selection and its definitions.  The work was designed to be both brief and portable. Its 400 pages were mostly divided into two columns and definitions were printed in small type, across one column each, and margins on each page were minimal.

Almost as soon as his first dictionary was published Webster began composition of an expanded and fully comprehensive dictionary, which took him 18 years to complete.  In 1828 when Webster was 70 years old his An American Dictionary of the English Language was finally published in 2 thick quarto volumes containing 70,000 entries. 2500 copies were printed at the high cost of $20 each. Copies sold slowly, and were not all bound at the same time, resulting in binding variants.

"Webster completed his dictionary during his year abroad in 1825 in Paris, France, and at the University of Cambridge. His book contained seventy thousand words, of which twelve thousand had never appeared in a published dictionary before. As a spelling reformer, Webster believed that English spelling rules were unnecessarily complex, so his dictionary introduced American English spellings, replacing "colour" with "color", substituting "wagon" for "waggon", and printing "center" instead of "centre". He also added American words, like "skunk" and "squash", that did not appear in British dictionaries . . ." (Wikipedia article on Noah Webster, accessed 06-05-2012).

Webster's original manuscript of his 1828 dictionary is preserved in the Morgan Library & Museum.