Image Source: en.wikipedia.org
A photograph of the original manuscript attributing it to Thomas à Kempis and dated 1441. Image Source: daten.digitale-sammlungen.de
Page 5 of the first edition printed by Günther Zainer of Augsburg in 1473. 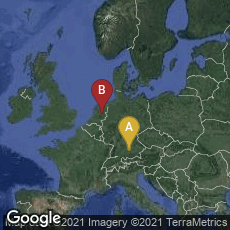 Thomas à Kempis Writes "The Imitation of Christ", One of the Most Widely Published of Religious Texts A portrait of Thomas a Kempis.

In 1441 German-Dutch canon regular Thomas à Kempis (Thomas van Kempen or Thomas Hemerken or Haemerken), a monk of the Augustinian Canons at Mount St. Agnes, near Zwolle, Holland, probably finished Imitatio Christi. He worked on the manuscript from about 1418 to 1427.
This work was

"the classic expression of the Devotio Moderna, or 'modern devotion,' a movement that responded to the widespread need for deepened spiritual life in the years before the Reformation. The ideals of the Devotio Moderna grew out of the Windesheim Congregation, a religious community of Augustinian Canons established in the Netherlands in 1387. This congregation admitted groups of devout laymen, known as the 'Brethren of the Common Life,' who were followers of Geert Groote of Deventer (1340-1384). While the canons lived a reformed monastic life according to the Rule of St. Augustine, the brothers and sisters of the Common Life lived by an informal code of Christian self-discipline that relentlessly promoted personal devotion, simplicity, and humility, ideals that are expressed fervently in the Imitatio Christi" (http://www.smu.edu/Bridwell/Collections/SpecialCollectionsandArchives/Exhibitions/ImitatioChristi/1473)

Imitatio Christi was widely copied during the Middle Ages, as a result of which 400 manuscripts of the text survived, including, remarkably, Thomas's autograph manuscript dated 1441, which is preserved in the Bibliothèque Royale, Brussels. (MS 5455-61)

The work was first published in print in Augsburg by Günther Zainer, [before 5 June 1473.] ISTC No. ii00004000. In June 2012 a digital facsimile of the first printed edition was available from the website of the Bayerische Staatsbibliothek, München, at this link. From the first edition onward it was printed 745 times before 1650. Apart from the Bible, by 1650 no book had been translated into more languages than the Imitation of Christ.

One of the most widely published of all texts, Imitatio Christi was, in later centuries, translated into hundreds of languages, and has appeared in more than 2000 editions.