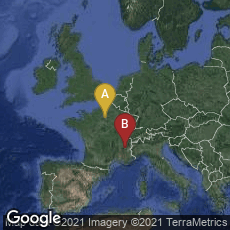 In 1798 the first official public national industrial exposition, Exposition publique des produits de l'industrie, occurred in Paris. It was organized by the Marquis de Avèze and François de Neufchâteau, Minister of the Interior for the French Republic. For this two catalogues were issued. The first issue, printed in Paris by the Imprimérie de la République, consisted of 24 pages.  A second issue, expanded to 30 pages, was issued at Grenoble by J. Allier. Its title page read as follows:

"It appears from a statement made by the Marquis d'Avèze, that in the year V of the Republic, 1797, that gentleman was requested by the Minister of the Interior to undertake the office of Commissioner to the Manufactures of the Gobelins (tapestries), of Sèvres (china) and of Savonnerie (carpets). On visiting these establishments, the marquis found the workshops deserted; for the artisans had been in a starving condition for two years, while the warehouses were full of the results of their labours, and no commercial enterprise came to relieve the general embarassment. It then occurred to the marquis that if these and other objects of industry of the national manufactures could be collected together in one large exhibition, a stimulous might be given to the native industry, and thus relief be afforded to the suffering workmen. The plan was approved by M. François de Neufchateau, the Minister of the Interior, and the chateau of St. Cloud was appropriated for the purpose.'In a few days the walls of every apartment in the castle were hung with the finest Gobelin tapestry; the floors covered with the superb carpets of the Savonnerie, which long rivalled the carpets of Turkey, and latterly have far surpassed them; the large and beautiful vases, the magnificent groups, and the exquisition pictures of Sèvres china, enriched these saloons, already glowing the chefs d'oeuvre of Gobelins and the Savonnerie. The Chamber of Mars was converted into a receptacle for porcelain, where might be seen the most beautiful services of every kind, vases for flowers,—in short, all the tasteful varieties which are originated by this incomparable manufacture.' The 18th Fructidor was the day fixed for public admission, but previous to that time a number of distinguished persons in Paris and many foreingers visited the Exposition, and made purchases sufficient to afford a distribution to the workmen, whereby some temporary relief was afforded to their necessities. But on the very morning of the 18th, the walls of the city were placarded with the decree of the Directory for the expulsion of the nobility. The chateau of St. Cloud was given into the custody of a comapny of dragoons, the Marquis d'Avèze was in the proscribed list, and thus ended the scheme which had promised so well.

"Early in the following year, however (1798,) on his return from proscription to Paris, the marquis resumed his labours. The palace selected for the Exposition was the Maison d'Orsay, Rue de Varennes, No. 667. The objects collected consisted of rich furniture and marqueterie by Boule, Riessner, and Jacob; clocks and watches by L'Epine and Leroy; porcelain and china from the manufactories of Sèvres, of Angoulême and of Nast; richly bound books; silks of Lyons; historical pictures by Vincent, David, and Suvé; landscapes by Hue and Valenienne, flowers by Vandael, and Van Pankouck; and many other objects of an equally luxurious and aristocratic character; all tending to prove that in banishing the aristocracy from Paris, the Government had banished the chief patrons of French manufacture. The Exposition was exceedingly attractive and successful, and the Government accordingly determined to adopt the idea and carry it out on a grand scale. An admirable opportunity was afforded on the return of Napoleon from the successful termination of the Italian wars. On the same spot in the Champ de Mars on which the army had celebrated the inauguration of the collection of Italian spoils, and only six weeks after that fête, the nation erected the 'Temple of Industry,' around which were arranged sixty porticoes filled with objects of use or of beauty. The Exhibition remained open only during the last three complimentary days of the year VI, of the Republic; but it excited the greatest enthusiasm throughout the country. The merits of the several exhibitors were entrusted to the decison of a jury composed of nine men, distinguished in science and in art; and this plan was found to work so well, that it was continued  in subsequent Expositions, the only change being to increase the number of jurors. The names of some of the manufacturers in the prize list are of European reputation; as for example, that of Breguet, connected with the progress of watch and clock making in France, Lenoir, the inventor and maker of mathematical instruments; Didot and Herhan, who so greatly improved the art of printing; Dilh and Guerhard, whose manufacture of painted china rivalled that of Sèvres, Conté, celebrated as a mechanist and engineer, who first applied machine-ruling to engraving; Clouet and Payen, so well known for their chemicals; and Denys du Luat, among whose cotton yarns were some of the extraordinary finess of No. 110" (Tomlinson, Cyclopaedia of Useful Arts I, ii-iii)