Reproduced from the digital facsimile from Arquivo Nacional Torre do Tombo, Lisbon, Portugal. 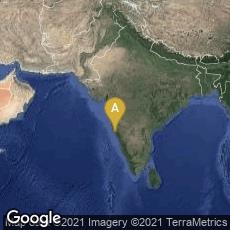 The earliest book printed in India, of which a copy survived, is Compendio spritual da vida Christãa by Gaspar de Leão, the first Archbishop of Goa, completed in Goa by printers João Quinquencio and João de Endem on July 2, 1561. This is known from a copy in the New York Public Library and a copy at the University College Dublin, Ireland.

The second book known to have been printed in India, of which copies survive, is Colóquios dos simples e drogas he cousas mediçinais de India e assi dalgũas frutas achadas nella onde se tratam algũas cousas tocantes a medicina, pratica, e outras cousas boas pera saber (Conversations on the simples, drugs and materia medica of India and also on some fruits found there, in which some matters relevant to medicine, practice, and other matters good to know are discussed) by the Portuguese Jewish physician, naturalist and pioneer of tropical medicine, Garcia de Orta. Garcia de Orta sailed for India in 1534 as Chief Physician aboard the armada of the Viceroy Martim Afonso de Sousa. He worked and carried out his research at Goa, where he died in 1568. His book was first printed by João de Endem at his press in St. John's College, Goa, and completed on April 10, 1563.