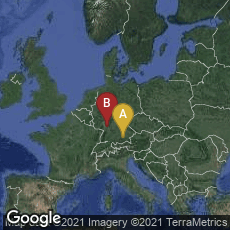 Each of the 18 volumes of the Survivors' Talmud contain images of the death camps, barbed wire, and of hope in the land of Israel.

In 1948 the U. S. Army in Germany issued a full-sized edition of the Talmud in Hebrew from Munich and Heidelberg in 19 folio volumes, printed photo-offset from the standard Vilna edition of the Talmud. This became known as the "Survivors' Talmud." The title page depicted an idyllic Land of Israel above an image of barbed wire surrounding a work camp. Only 100 sets were printed.

The project was the result of an agreement signed in September 1946 by commander in chief, U.S. Occupying Forces in Germany, General Joseph T. McNarney, and the Joint Distribution Committee. The edition took longer than expected to produce because of the shortage of paper and the difficulty of finding a complete set of the Talmud in Germany after the Holocaust. Before the set could be printed two sets of the Talmud had to be send from the U.S. The edition was printed at the Carl Winter Printing Plant in Heidelberg, which had previously printed Nazi propaganda. This is the sole instance of a national government publishing the Talmud.

The edition contained a dedication in English which stated:

"This edition of the Talmud is dedicated to the United States Army. This army played a major role in the rescue of the Jewish people from total annihilation, and after the defeat of Hitler bore the major burden of sustaining the DPs of the Jewish faith. This special edition of the Talmud published in the very land where, but a short time ago, everything Jewish and of Jewish inspiration was anathema, will remain a symbol of the indestructibility of the Torah. The Jewish DPs will never forget the generous impulses and the unprecedented humanitarianism of the American forces, to whom they owe so much.

"In the name of the Rabinical Organization

Chairman and Chief Rabbi of the U.S. Zone"

Mintz & Goldstein, Printing the Talmud from Bomberg to Schottenstein (2005) No. 64, reproducing the title page.