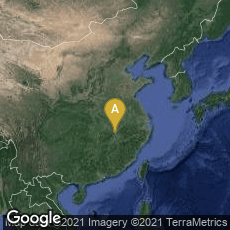 Two of the 20,000 year-old pottery fragments found in the Xianrendong Cave in China.  Photo by AFP/Science/AAAS. (Click on image to view larger.)

Fragments of pottery 20,000 years old found in Xianrendong Cave in Jiangxi Province, southern China, in 2012 are the oldest known pottery. Archaeological studies of the cave indicate that it was inhabited by mobile foragers who hunted and gathered during the Last Glacial Maximum. The vessels, which may have been concave, were probably used for cooking food. The site in which the pottery fragments were found is one of the earliest kitchens.

Images of the pottery were published in The New York Times on June 28, 2012.