Cover of Recreational Mathematics magazine (1961) with design by Laposky. Art work by Laposky illustrating an article by him in Recreational Mathematics magazine entitled "Electronic Abstractions: Mathematics in Design." (1961). Somewhat out of focus image of Laposky with his oscilloscope, the tool he used to create his art. 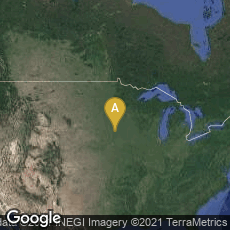 In 1950 American draftsman, graphic artist and mathematician Benjamin (Ben) F. Laposky of Cherokee, Iowa, first used a cathode ray oscilloscope with sine wave generators and various other electrical and electronic circuits to create abstract art, which he called "electrical compositions." The electrical vibrations shown on the screen of the oscilloscope, which included Lissajous figures, he recorded by still photography. Some of Laposky's images were published in Scripta Mathematica in 1952. These have been called the earliest computer graphics.

In 1953 Laposky exhibited fifty images that called "Oscillons" (or oscillogram designs) at the Sanford Museum in Cherokee, Iowa. To record this exhibition and Laposky's statements of his artistic philosophy the museum published an exhibition catalogue entitled electronic abstractions. Because of this exhibition Laposky is credited as the earliest pioneer in electronic art, more specifically in the analog vector medium. In later work Laposky also incorporated motorized rotating filters of variable speed to color the patterns. He never programmed computers to create images.

A version of Laposky's electronic abstractions show was exhibited across the United States, in France at LeMons, and other places by the Cultural Relations Section of the United States from 1953 to 1961.