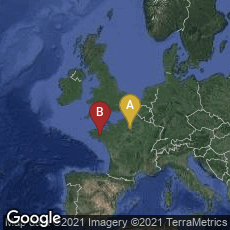 Rolled out experimentally in 1978 in Brittany, and throughout France in 1982 by PTT (Poste, Téléphone et Télécommunications), the Minitel was a Videotex online service accessible through telephone lines.  In 1991 PTT was divided into France Télécom and La Poste, with the Minitel operated by France Télécom. Users of the Minitel could make online purchases, make train reservations, check stock prices, search the telephone directory, have a mail box, and chat in a way similar to the Internet.

"Millions of terminals were lent for free to telephone subscribers, resulting in a high penetration rate among businesses and the public. In exchange for the terminal, the possessors of Minitel would not be given free 'white page' printed directories (alphabetical list of residents and firms), but only the yellow pages (classified commercial listings, with advertisements); the white pages were accessible for free on Minitel, and they could be searched by a reasonably intelligent search engine; much faster than flipping through a paper directory.

"France Télécom estimates that almost 9 million terminals—including web-enabled personal computers (Windows, Mac OS, and Linux)—had access to the network at the end of 1999, and that it was used by 25 million people (of a total population of 60 million). Developed by 10,000 companies, in 1996, almost 26,000 different services were available" (Wikipedia article in Minitel, accessed 07-11-2012).

Though usage was concentrated in France, the Minitel had a significant level of usage primarily in other European countries. The service was introduced in the United States very late, in 1993, by which time it faced serious competition from early Internet providers such as AOL, Prodigy, and CompuServe.  The Minitel service was finally shut down by France Télécom on June 30, 2012.