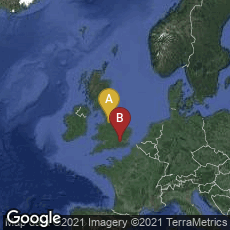 "Game of Draughts," One of the Earliest Computer Games, Runs on the Manchester Mark 1

In February 1951 British computer scientist Christopher Strachey finished a program for the game of draughts, or checkers. The game ran for the first time on the Pilot ACE at the National Physical Laboratory, Teddington, on July 30, 1951, but completely exhausted the machine's memory.

"When Strachey heard about the Manchester Mark 1, which had a much bigger memory, he asked his former fellow-student Alan Turing for the manual and transcribed his program into the operation codes of that machine by around October 1951. The program could 'play a complete game of draughts at a reasonable speed' " (Wikipedia article on Christopher Strachey, accessed 09-12-2012).