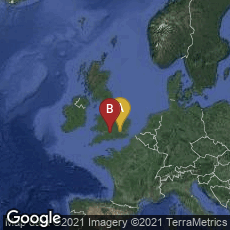 On May 1, 1843 English Academic painter and illustrator John Callcott Horsley designed the first commercially produced and printed Christmas card, commissioned by English civil servant and inventor Henry Cole. Joseph Cundall, a London publisher of children's books, collaborated on the project, put his imprint on the card, and sold them at his Summerly Home Treasury Office. Summerly was a pseudonym invented by Henry Cole and used in various of his collaborations with Cundall.

The hand-colored lithographed card, which read "A Merry Christmas and A Happy New Year to You," was controversial because it included a picture of a family with a small child drinking wine together. That disturbed the UK temperance movement which was calling for abstinence from alcohol at the time. This possibly contributed to its commercial success with two printings totalling 2050 cards sold in 1843 for one shilling each. The first printing was 1000 copies. In his census published in 1977 Kenneth Rowe located 21 surviving examples of the card. On November 24, 2001 a copy of this card sold for £22,500 at auction at Henry Aldridge and Son in Devizes, Wiltshire, England.