"Index" or "Register of this book" from the copy of Turrecremata, Expositio super toto psalterio completed 4 October, 1470, in the Bayerische Staatsbibliothek. 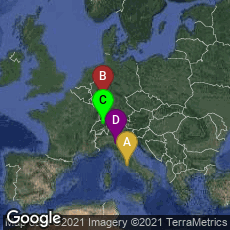 The First Printed Books with Indices: Reference Works for Preachers Index page from the 1470 edition of Mammotrectus super Bibliam issued by Helias Helye de Laufen in Beromünster, Switzerland. From the Bayerische Staatsbibliothek.

Mammotrectus super Bibliam, an etymological analysis of the Bible written in the 14th or 15th century by Giovanni Marchesini (Johannes Marchesinus), an Italian Franciscan friar from the Reggio Emilia area, was first published in print by Peter Schoeffer of Mainz (ISTC No.: im00232000), and by Helias Helye de Laufen in Beromünster, Switzerland in 1470. (ISTC No.: im00233000). According to the ISTC both editions were issued on November 10, 1470.

The Swiss edition of this reference work for preachers may be the first printed book to contain a thematic index at the end of the text. The index is linked to sections in the text which are identified with letters. The Swiss edition I saw at the Lucerne Public Library in September 2012. In November 2014 a digital facsimile of the Swiss edition was available from the Bayerische Staatsbibliothek at this link.

Other printed books with indices also appeared during 1470. According to Colin Clair, A Chronology of Printing (1969) the first printer to make use of a registrum, or index, was the "Roman printer of the Epistolae Hieronymi (Sixtus Riessinger ?), published not later than 1470. It was not called a registrum in this work but under the title Inchoationes quinternorum the printer gave a list of the first words of each of the eighty or more gatherings. Ulrich Han was the first to employ a more normal register in his Turrecremata, Expositio super toto psalterio completed 4 October, 1470, giving not only the catchwords of the gatherings but also those of the double sheets." In November 2014 I could not find an entry for the Epistolae Hieronymi referred to by Clair in the ISTC, and wonder if his citation may not have been in error. However, the Turrecremata was ISTC no. it00517000, and in November 2014 a digital facsimile of that work was available from the Bayerische Staatsbibliothek at this link.