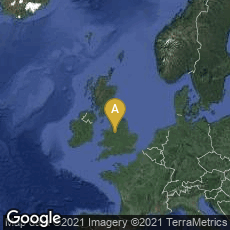 In 1806 English inventor, Ralph Wedgwood of Etruria in Staffordshire, cousin and business partner of potter and industrialist Josiah Wedgwood, received a patent for the earliest form of carbon paper. Wedgwood's patent was for "Apparatus for producing duplicates of writings," British Patent number 2972, published: 07 October 1806. It was first printed about 1850, so a major purpose was duplication. However, Wedgwood the was also called the  "stylographic writer" or Noctograph. The noctograph or night writer was composed of a piece of carbon paper and a metal board with clips to hold the paper in place and guidelines to make for straight writing in the dark. The user wrote with a metal stylus, and thus did not have to ink a pen or worry about knocking an inkstand over in the dark. The original purpose was to allow the blind or partially sighted to write with more ease than with a traditional pen. However, it was used by the fully sighted to write in the dark, a significant advantage in days before good artifical lighting.

This invention appears to have been a great success in that it may have earned £10,000 in profit within the first seven years of the patent.