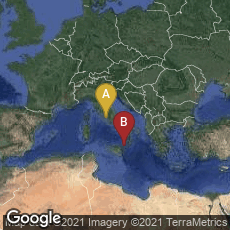 "Fol. [1a] with commentary Genesis 3,8 (lines 9-11): 'There are Many aggadic Midrashim, and our Rabbis have previously set them in proper order in Genesis Rabbah and other Midrash collections. However, I have come for the plain meaning of the biblical text and for the Aggadot that settle the words of the Scriptural text in their proper order.' " (http://www.library.upenn.edu/exhibits/cajs/revealed/revealed-med-det13.html).

On February 17, 1475 Abraham ben Garton completed the printing of the first dated book in Hebrew at Reggio di Calabria, Italy. It was a commentary on the Torah by Rabbi Shlomo Rashi, and it remains one of the rarest of all printed books. The image comes from the facsimile of the only known close to complete copy, currently housed at the Biblioteca Palatina in Parma (ed. by J. Joseph Cohen, National and University Library, Jerusalem, [1969]).

"Although Garton's book is the first dated printed edition, the work is neither the first edition of Rashi's commentary, nor the first book to be printed in Hebrew. Between 1469 and 1472 three brothers, Obadiah, Menasseh, and Benjamin of Rome, were active as the first Hebrew typographers. Six works are positively known to have come off their press, among which was the first, albeit undated edition of Rashi's commentary. Nonetheless, [in] the 1475 edition Abraham Garton created and employed, for the first time, a typeface based on a Sephardic semicursive hand. It was this same style of typeface that a few years later, when commentary and text were incorporated onto one page, would be used to distinguish Rabbinic commentary from the text proper. Ultimately, this typeface would be known as Rashi script" (Wikipedia article on Abraham Garton, accessed 07-25-2009).