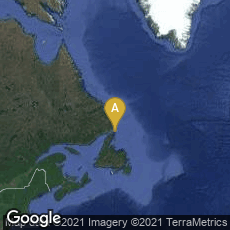 The reconstructions of three Norse buildings are the focal point of this archaeological site, the earliest known European settlement in the New World. The archaeological remains at the site were declared a UNESCO World Heritage Site in 1978.

In 1960 Norwegian explorer Helge Ingstad and his wife, archaeologist Anne Stine, discovered the remains of a Norse village in at L'Anse aux Meadows on the northernmost tip of Newfoundland in the Canadian province of Newfoundland and Labrador. This was the first conclusive proof that Greenlandic Norsemen had found a way across the Atlantic Ocean to North America, roughly 500 years before Christopher Columbus and John Cabot.

"Archaeologists determined the site is of Norse origin because of definitive similarities between the characteristics of structures and artifacts found at the site compared to sites in Greenland and Iceland from around CE 1000.

"Helge Ingstad and Anne Stine Ingstad carried out seven archaeological excavations from 1961 to 1968, investigating eight complete house sites as well as the remains of a ninth.

"The L'Anse aux Meadows area was originally inhabited by Native peoples as far back as 6000BP. The area was probably sought due to its abundance of marine life and close proximity to Labrador. The most prominent of early Native inhabitants were the Dorset Eskimo; however, during the centuries of Norse exploration of the area there were thought to be no inhabitants in the immediate area" (Wikipedia article on L'Anse aux Meadows, accessed 10-24-2012).

"L'Anse aux Meadows remains the only widely accepted instance of pre-Columbian trans-oceanic contact and is notable for its possible connection with the attempted colony of Vinland established by Leif Ericson around the same time period or, more broadly, with Norse exploration of the Americas. . . .The settlement at L'Anse aux Meadows has been dated to approximately 1,000 years ago, an assessment that tallies with the relative dating of artifact and structure types.The remains of eight buildings were located. They are believed to have been constructed of sod placed over a wooden frame. Based on associated artifacts, the buildings were variously identified as dwellings or workshops. The largest dwelling measured 28.8 by 15.6 m (94.5 by 51 ft) and consisted of several rooms. Workshops were identified as an iron smithy containing a forge and iron slag, a carpentry workshop, which generated wood debris, and a specialized boat repair area containing worn rivets. Besides those related to iron working, carpentry, and boat repair, other artifacts found at the site consisted of common everyday Norse items, including a stone oil lamp, a whetstone, a bronze fastening pin, a bone knitting needle, and part of a spindle. The presence of the spindle and needle suggests that women were present as well as men. Food remains included butternuts, which are significant because they do not grow naturally north of New Brunswick, and their presence probably indicates the Norse inhabitants travelled farther south to obtain them.Archaeologists concluded that the site was inhabited by the Norse for a relatively short period of time.

"Norse sagas are written versions of older oral traditions. Two Icelandic sagas, commonly called the Saga of the Greenlanders and the Saga of Eric the Red, describe the experiences of Norse Greenlanders who discovered and attempted to settle land to the west of Greenland, identified by them as Vinland. The sagas suggest that the Vinland settlement failed because of conflicts within the Norse community, as well as between the Norse and the native people they encountered, whom they called Skrælingar.