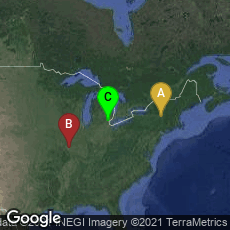 Listening to the Earliest Surviving Tinfoil Recording of a Musical Performance In October 2012 computing made it possible to listen to the oldest playable recording of an American voice and the first-ever capturing of a musical performance.  The recording on tinfoil, which lasts 78 seconds, was made on a phonograph in St. Louis, Missouri on June 22, 1878, months after Thomas Edison invented the phonograph.

" 'In the history of recorded sound that's still playable, this is about as far back as we can go,' said John Schneiter, a trustee at the Museum of Innovation and Science in Schenectady, where it was played Thursday night in the city where Edison helped found the General Electric Co.

"The recording opens with a 23-second cornet solo of an unidentified song, followed by a man's voice reciting 'Mary Had a Little Lamb' and 'Old Mother Hubbard.' The man laughs at two spots during the recording, including at the end, when he recites the wrong words in the second nursery rhyme.

"When the recording was played using modern technology during a presentation Thursday at a nearby theater, it was likely the first time it had been played at a public event since it was created during an Edison phonograph demonstration held June 22, 1878, in St. Louis, museum officials said. The recording was made on a sheet of tinfoil, 5 inches wide by 15 inches long, placed on the cylinder of the phonograph Edison invented in 1877 and began selling the following year. A hand crank turned the cylinder under a stylus that would move up and down over the foil, recording the sound waves created by the operator's voice. The stylus would eventually tear the foil after just a few playbacks, and the person demonstrating the technology would typically tear up the tinfoil and hand the pieces out as souvenirs, according to museum curator Chris Hunter.

"Popping noises heard on this recording are likely from scars left from where the foil was folded up for more than a century.

" 'Realistically, once you played it a couple of times, the stylus would tear through it and destroy it,' he said. Only a handful of the tinfoil recording sheets are known to known to survive, and of those, only two are playable: the Schenectady museum's and an 1880 recording owned by The Henry Ford museum in Michigan.

"Hunter said he was able to determine just this week that the man's voice on the museum's 1878 tinfoil recording is believed to be that of Thomas Mason, a St. Louis newspaper political writer who also went by the pen name I.X. Peck. Edison company records show that one of his newly invented tinfoil phonographs, serial No. 8, was sold to Mason for $95.50 in April 1878, and a search of old newspapers revealed a listing for a public phonograph program being offered by Peck on June 22, 1878, in St. Louis, the curator said. A woman's voice says the words 'Old Mother Hubbard,' but her identity remains a mystery, he said. Three weeks after making the recording, Mason died of sunstroke, Hunter said" (http://www.google.com/hostednews/ap/article/ALeqM5izrvFWaR6h-FWye-Eq2bZN5RCqOg?docId=c9195e25da6f473e90e726152ddbc4d6, accessed 10-26-2012).