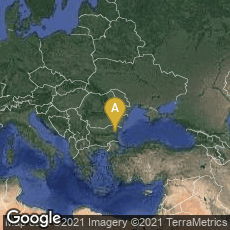 The Earliest Prehistoric Town in Europe

The remains of the settlement made of two-story houses near the town of Provadia. (Click on image to view larger.)

Solnitsata, a prehistoric town unearthed in eastern Bulgaria near the town of Provadia, has been estimated to date between 4,700 and 4,200 B.C. The town walls, 3 meters (6 feet) high and 2 meters (4 ½ feet) thick, are believed to be the earliest and most massive fortifications surviving from prehistoric Europe.

The inhabitants of the town boiled brine from salt springs in kilns, then baked it into bricks and used it for trading. The high value of salt may explain why ancient caches of gold jewellery and ritual objects have been unearthed in the region.

"A collection of 3,000 gold objects found 40 years ago at a necropolis near Varna represented the oldest trove of ancient gold treasure in the world.

" 'At a time when people did not know the wheel and cart, these people hauled huge rocks and built massive walls. Why? What did they hide behind them? The answer was salt,' Vasil Nikolov, a researcher with Bulgaria's National Institute of Archeology, told AFP. 'Salt was an extremely valued commodity in ancient times, as it was both necessary for people's lives and was used as a method of trade and currency starting from the sixth millennium BC up to 600 BC,' he said.

"The 'town', known as Provadia-Solnitsata, was small by modern standards and would have had around 350 inhabitants" (http://www.telegraph.co.uk/news/worldnews/europe/bulgaria/9646541/Bulgaria-archaeologists-find-Europes-most-prehistoric-town-Provadia-Solnitsata.html, accessed 11-2-2012).