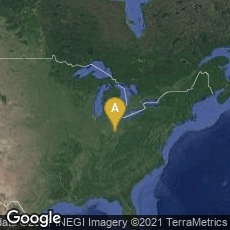 NCR Issues the Smallest Published Edition of the Bible, and the First to Reach the Moon Image Source: www.bonhams.com
On November 5, 2020 Bonhams offered at auction this very special copy of the what they called the First Lunar Bible in a very special ornate gold metal presentation setting and deluxe leather presentation folder, "carried by Lunar Module pilot Edgar Mitchell in his "Personal Preference Kit (PPK) during Apollo 14 aboard the Lunar Module Antares."
"Accompanied by a letter of provenance. In full: "I certify that this Holy Bible listed in the official Apollo Prayer League Lunar Bible Registry and containing all 1,245 pages of the King James Bible.
"Was flown by Astronaut Edgar D. Mitchell to the Surface of the Moon on February 5, 1971 on the Lunar Module Anteres on behalf of Reverend John M. Stout, Director of the Apollo Prayer League.
"In 1968 a group of individuals associated with NASA program formed the Apollo Prayer League, an organization dedicated to the prayerful support of NASA employees and the Apollo astronauts. A primary goal of the group was to land a Bible on the moon in honor of astronaut Edward White Jr., who died January 27, 1967 in the Apollo 1 fire. White had wanted to carry a Bible to the moon.
"Members of the Apollo Prayer League employed at the Manned Spacecraft Center in Houston made a special multi-focal 'First Lunar Bible' comprised of Ed White's Revised Standard Version and the King James Version. Bible societies in fifty-seven different countries participated in the project.
"The Lunar Bible is a replica of the King James Version used in making the composite Bible. This Lunar Bible also landed on the surface of the moon and was returned to Reverend Stout, where it has remained as part of his private collection. It was released this 24th day of April 2009 for placement in this selected museum.
Attested: Edgar D. Mitchell / Apollo 14 Lunar Module Pilot; John M. Stout / Director, The Apollo Prayer League."
The bible, estimated at $20,000-$30,000, did not sell.

In 1966 the Research and Development department of National Cash Register (NCR) of Dayton, Ohio produced an edition of all 1245 pages of  the World Publishing Company's No. 715 Bible on a single 2" x 1-3/4" photochromatic microform (PCMI) The microform contained both the Old Testament on 773 pages and the New Testament on 746 pages, and was issued in a paper sleeve with title on the cover and information about the process inside and on the back.

On the microform each page of double column Bible text was about 0.5 mm wide and 1 mm high. Each text character was 8 um high (ie 8/1000ths of a millimeter). NCR noted on the paper wallet provided with the microform that this represented a linear reduction of about 250:1 or an area reduction of 62,500:1. This would correspond to the original text being circa 2 mm high. To put this into perspective, NCR also noted that if this reduction was used on the millions of books on the 270+ miles of shelving in the Library of Congress, the entire Library of Congress as it existed in 1966 could be stored in six standard filing cabinets.

♦ In 1971 Apollo 14 lunar module pilot Edgar D. Mitchell carried 100 of the microform bibles aboard the lunar module Antares, as confirmed by NASA's official manifest. Launched January 31, 1971, Mitchell and the bibles reached the Fra Mauro formation of the Moon on February 5 aboard the Antares before returning to the command module for the voyage back to Earth. This was the first edition of the Bible to reach the Moon, and probably the first book of any kind of reach the moon and return. A second parcel containing 200 microform Bibles flew in Edgar Mitchell's command module "PPK" bag in lunar orbit, and did not land. These 200 copies represented extra Bibles to be used if something happened to the lunar module copies.