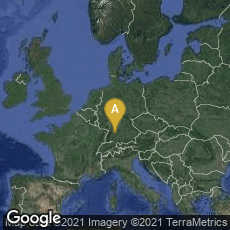 A: Esslingen am Neckar, Baden-Württemberg, Germany In 1959 German computer scientist Theo Lutz from Hochschule Esslingen created the first digital poetry using a text-generating program called “Stochastiche Text” written for the ZUSE Z22 computer. The program consisted of only 50 commands but could theoretically generate over 4,000,000 sentences.

Working with his teacher, Max Bense, one of the earliest theorists of computer poetry, Lutz used a random number generator to create texts where key words were randomly inserted within a set of logical constants in order to create a syntax. The programme thus demonstrated how logical structures like mathematical systems could work with language.