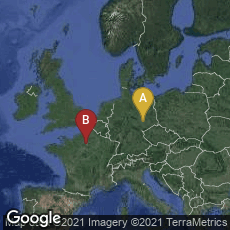 In 1830 German jurist, legal historian and paleographer Gustav Friedrich Haenel (Hänel) published in Leipzig Catalogi librorum manuscriptorum, qui in bibliothecis Galliae, Helvetiae, Belgii, Britanniae M., Hispaniae, Lusitaniae asservantur. This work, with approximately 620 pages published in a single quarto volume, was the first attempt since that of Montfaucon in 1739 to publish a union catalogue of manuscripts in European libraries. In this work Haenel left out the vast holdings of the entire Italian peninsula and Germany. Besides listings of manuscripts, Haenel, who visited many of the libraries covered, sometimes provided useful information regarding the history of each library, the number of printed works held, and the number of manuscripts in each library.

Twenty-three years later, in 1853, the Abbé Jacques Paul Migne published in Paris a revised and expanded edition of Haenel's work entitled Dictionnaire des manuscrits, ou receuil de catalogues de manuscrits existants dans les principales bibliothèques d'Europe. Migne's edition, prepared by an anonymous editor, appeared in two volumes, the pages of which were set in two columns of relatively densely set type. The set appeared as part of Migne's inexpensive and widely distributed series of theological works intended to form a universal library for the Catholic priesthood. To update information in French libraries the editor incorporated information provided in the first volume of the French union catalogue of manuscripts published in 1849.  The editor also added extensive coverage of manuscripts in libraries in Germany and on the Italian peninsula, making this the first truly continent-wide union catalogue of manuscripts since Montfaucon, which continued to be cited when no other convenient source of information was available.