A 15th century reader's pointer in a different copy of the Ratdolt Eusebius poiints to the reference to Gutenberg's discovery of printing in "1440". 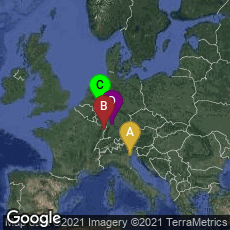 Ownership inscription of Hartmann Schedel, physician author of The Nuremberg Chronicle in his copy of the Ratdolt Eusebius preserved in the Bayerische Staatsbibliothek.

Printer Erhard Ratdolt's edition of Eusebius of Caesarea's (Eusebius Caesariensis) Chronicon issued from Venice on September 13, 1483 recorded an entry for the year 1440 added by the editor, Johannes Lucilius Santritter of Heilbronn, crediting Johann Gutenberg, with the invention of "an ingenious way of printing books." This was one of the earliest acknowledgments in print of Gutenberg's invention.

"This statement apparently influenced the account in the 1499 Cologne Chronicle, where it is stated that the printing process was 'developed' ('Wart undersoicht') in the year 1440 and after, whereas printing was 'begun' ('do began men tzo drucken') in the jubilee year 1450 and after.

"If this statement is correct, it must refer to the period when Gutenberg was living in Strasbourg and when, as now-lost Strasbourg documents show, he was involved in teaching certain investors several mechanical skills, including gem cutting and polishing. A deposition in a lawsuit brought against Gutenberg makes reference to 'four pieces lying in a press' and to Gutenberg's wish that they be taken out and separated so that their purpose would not be known. Many generations of investigators assumed that this statement referred to typographic experiments, and they have elucidated in detail what the four pieces 'must' have been. However, Kurt Köster has showed that Gutenberg's major Strasbourg undertaking of the late 1430s was the mass production of pilgrim mirrors in anticipation of the Aachen pilgrimage, and he has argued convincingly that all the vocabulary of the lawsuit in question could apply plausibly to this enterprise, not to typographic experiments. The argument does not entirely invalidate the possiblity that in 1440 Gutenberg was experimenting with typography. But there is no proof, and all the earliest physical survivals in typography have a Mainz, not a Strasbourg, context" (Paul Needham, "Prints in the Early Printing Shops," IN: Parshall (ed) The Woodcut in Fifteenth-Century Europe [2009] 44).

ISTC no. ie00117000. In February 2015 a digital facsimile of physician Hartmann Schedel's copy of Ratdolt's edition was available from the Bayerische Staatsbibliothek, München at this link. The utility of Eusebius's text to Schedel, author of the Nuremberg Chronicle, is evident.

The Suda, a Massive Byzantine Encyclopedic Dictionary
Jerome Translates and Supplements the Chronicon of Eusebius
Eusebius Introduces his Tabular Timeline System
Origen's Hexapla: Made Possible by the Codex Form, and the First Codices to Display Information in Tabular Form
Reconstruction of the Contents of the Library of Eusebius
The Bobbio Orosius Contains the Earliest Surviving Carpet Page in Insular Art

By 1500 Printing Presses are Established in 282 Cities
The Library of Hartmann Schedel, the Largest Private Collection of Books that Survived from 15th Century Germany, Remains Preserved in Munich
The Stuttgart Psalter: "A Perfect Relationship between Text and Picture"
Augustine's "De civitate dei", Possibly the Earliest Printed Book for which the Printer's Manuscript Remains Extant
Hartmann Schedel Publishes "The Nuremberg Chronicle," the Most Extensively Illustrated Printed Book of the 15th Century
Breydenbach's "Peregrinatio in terram sanctam", the First Illustrated Travel Book: An International Bestseller
The Overlap of Innovation and Tradition in the 15th Century Media Revolution
"Fasciculus temporum," Probably the Best-Selling 15th Century Printed Book by a Living Author.
Johannes Meursius Issues the First Guidebook to Athens