Jeremy Norman Collection of Images -&nbspCreative Commons
The pasted-in leaf is visible on the left page. The stain around that leaf was probably a result of moisture left on the page after the leaf was pasted on. 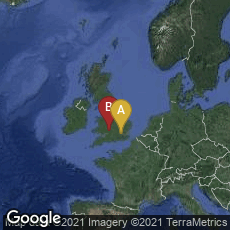 In 1827 English bibliographer Thomas Frognall Dibdin published the fourth and last of his editions of his An Introduction to the Knowledge of Rare and Valuable Editions of the Greek and Latin Classics in London. By this time Dibdin had expanded his work from its original 8vo edition (Gloucester, 1802) which consisted of only 63 pages, to a two-volume work of nearly 1200 pages. The work was expected to be a commercial success with 2000 copies issued on regular paper and 250 issued on large paper.

An innovative feature of the book was that all copies of both versions had pasted to p. 166 of volume 1 a proof leaf, printed on one side only, for William Pickering's very small format (32mo) Diamond Classics edition of the Greek New Testament (1828), making this the first "leaf book."