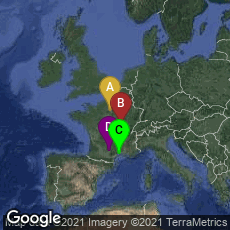 The first volume was undertaken under the leadership of the mathematician, paleographer and book thief, Guglielmo Libri. To this volume Libri made several major contributions. Besides his catalogue of the Seminary at Autun, first published separately in 1846, Libri wrote the catalogues of the city library and the medical school library at Montpellier, and of the library at Albi. Because Libri resigned from the commission before the catalogues received their final editing his work was revised for publication by Félix Ravaisson-Mollien.