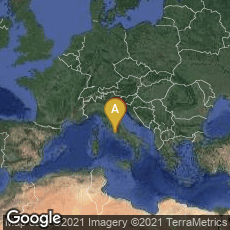 In 1630 Italian scientist Francesco Stelluti published Persio tradotto in verso schiolto e dichiarato . . . in Rome at the press of Giacomo Mascardi. This translation of the works of the Latin poet Persius (Aulus Persius Flaccus), Stelluti dedicated to Cardinal Francesco Barberini in an attempt to gain the Cardinal's patronage for the Accademia dei Lincei, one of the first scientific societies, of which Stelluti was a co-founder. Stelluti’s edition of Persius was intended for the most part as a means for advertising the Accademia’s activities. “Whenever he possibly could, Stelluti took a word or phrase in Persius—almost any word or phrase—and used it as an excuse to refer to one or another aspect of the natural historical researches of the Linceans. The most insignificant reference in the elegies sparked long and short excursuses on the Linceans’ work” (Freedburg, p. 187)

Stelluti's book was also the first book to contain images of organisms as viewed through the microscope. The book’s striking full-page image of a magnified bee (p. 52), showing minute details of the antennae, legs, sting, head and tongue, “still has the capacity to arouse the wonder of modern experts” (Freedburg, p. 189). On page 127 is a smaller illustration of a magnified grain weevil, including a detail of the tip of the insect’s snout and mandibles.

An obscure reference in Persius’s first satire to what may have been the ancient town of Eretum gave Stelluti his pretext for including the bee images, since the former Eretum was then presumably Monterotondo, seat of the Barberini country estate, and the Barberini family had adopted the bee as its emblem. Stelluti’s weevil image was likewise prompted by a mention of that insect in another of Persius’s poems.

Stelluti’s bee image is similar, but not identical to, an earlier image showing magnified views of a bee, that Stelluti published as a broadsheet in 1625 under the title Apiarium; this broadsheet is extremely rare, with only two or three copies recorded. The Apiarium was intended to form part of a projected encyclopedia by Stelluti’s fellow Lincean Federico Cesi, but this project was never realized. In 1624 Cesi had been sent a microscope by Galileo, another Lincean, and it was most likely this instrument that Cesi and Stelluti used to prepare their pioneering images of insects under magnification.