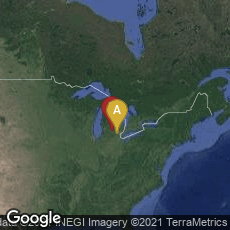 In 1874 American physician and chemist Robert Clark Kedzie at Michigan State University (then Michigan Agricultural College) in East Lansing, Michigan, published a report on "Poisonous Paper" in the First Annual Report of the Secretary of the State Board of Health of the State of Michigan for the Fiscal Year Ending Sept. 30, 1873, 60-64 (Lansing, 1874). Serving on the Michigan State Board of Health, and chairing its committee on "Poisons, Special Sources of Danger to Life and Health," Kedzie became aware of the profound dangers of arsenic in wallpaper, which was widely used in Michigan, and elsewhere in the United States at this time. In 1887, the American Medical Association estimated that between 1879 and 1883, 54–65% of all wallpaper sold in the United States contained arsenic, a third of which was at dangerous levels. Over time the poisonous pigment could flake or be brushed off the wallpaper and float in the air as inhalable dust or settle on furniture in the home.

To drive home the dangers of arsenic in wallpaper, also in 1874, Kedzie took the step of publishing one of the most unusual books ever issued: Shadows from the Walls of Death: Facts and Inferences Prefacing a Book of Specimens of Arsenical Wall Papers, a large volume measuring about 22 x 30 inches containing a title page and an 8 page preface followed by 86 samples cut from rolls of arsenic impregnated wallpaper. These volumes Kedzig donated to libraries throughout the State of Michigan. On May 12, 2012 The Ann Arbor Chronicle reported that only two of the one hundred copies remain extant in Michigan, one at the University of Michigan in Ann Arbor and the other at Michigan State University in East Lansing. Both copies remain toxic. The copy in Ann Arbor has all leaves encapsulated for safety, and can be handled only with gloves.

Two other copies of Shadows are preserved at Harvard University Medical School and the National Library of Medicine. The copy at NLM. A digital facsimile of the NLM copy is available at this link.