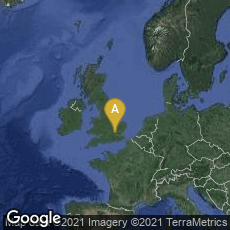 "Book of Hawking, Hunting and Heraldry", the Earliest Work Printed in England to Contain Color Printing Some of the color illustrations in the section on heraldry in the Book of St. Albans. These are the first color-printed woodcut illustrations produced in England. From the Cambridge University Library Copy.

In 1486 an unidentified printer, known as the "Schoolmaster Printer," issued the Book of Hawking, Hunting, and Heraldry (also known as The Boke of St. Albans) from the town of St. Albans, England.

This work on hawking, hunting, heraldry, and etiquette was the earliest book printed in England to include color printing. It is also the first English book on heraldry and sports, and among the earliest, if not the earliest printed book written by a woman, whose name is variously given as Juliana Berners, though this attribution has been disputed. Little is known about the presumed authoress; some of the most basic information about her is given in the second edition of this work issued by Wynkyn de Worde from his press at Westminister in 1496. She is said to have been prioress of Sopwell nunnery near St Albans, and daughter of Sir James Berners, who was beheaded in 1388.

This work "was, in effect an etiquette manual, one of a number of books published at that time-- a period of social and linguistic flux following the Hundred Years War (1337-1463)-- that showed gentlemen the proper way to act. Thus, the preponderance of terms for birds and animals results from the fact that The Book of St. Albans was concerned largely with hunting, shooting, and the like. It provided instruction on how to comport oneself in the hunt, but also on how to kill, clean and cook fish and game, and in what seasons and times of the day to sally forth. The book concludes with a list of correct terms, so that one could safely say one was hunting a singular of boars--not, heaven forfend, a group of them. As such, it takes the typical function of jargon-defining and reinforcing an exclusive group--to poetical extremes that have lingered in the language since.

"Less remembered terms from the Boke reflect the social life of the age. Berners gives us the appropriate ways to speak about a group of maidens (a rage), housekeepers (a foresight), officers (an execution), and even jugglers (a neverthriving--the poor men!). The tension between relgiious and social freedom prevalent in that era is also palpable: the group term for nuns is a superfluity, and for monks it is an abominable sight. (Tellingly, for the Scottish Reformation to come, that country contains a disworship of Scots). There is no standard linguistic analysis of the different types of collective terms, but Lipton inventories them using six different categories: onomatopeia, characteristic, appearance, habitat, commentary, and error. Appearance brings us a knot of toads, for example, while characteristic gives us a building of rooks, for how rooks build their nests. By far the most illuminating are those that develop via characteristic to comment on social behavior, such as the foresight of housekeepers mentioned above; an abeisance of servants; an impatence of wives;and more cheeringly, a cajolery of taverners. In the category of errors, on the other hand, stands the rage of maidens--not related to any anger on the part of virgins, but rather coming from an Old French ragier, or wantonness (making for an unintentionally ironic commentary on maidenhood in 1486" (Gronlund,"Inventory /A Pendantry of Nouns," Cabinet-A Quarterly of Art and Culture, Issue 41, [Spring 2011] 10).

Lipton, An Exhaltation of Larks or, The Venereal Game (1977).