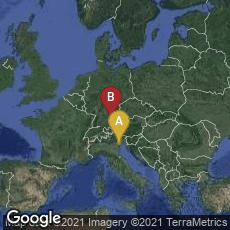 On April 1, 1486, from his press in Venice, German printer Erhard Ratdolt issued what is probably the earliest known type specimen. The only surviving copy of this broadside is preserved in the Bayerische Staatsbibliothek, München.

". . . having successfully run his printing workshop in Venice for more than ten years, Erhard Ratdolt began taking steps towards returning to Augsburg. In April 1485, while still in Venice, he published a breviary for the city of Augsburg (BSB-Ink B-844) which showed the high quality of the products of his printing workshop. A year later, Radolt accepted the invitation of the bishop of Augsburg Johannes of Werdenberg (1469-1486) and his successor Friedrich of Zollern (1486-1505) and returned to his home town to set up a press there. The change of location brought with it a change in the profile of his publications. Whereas in Venice Ratdolt had published numerous scientific and historical books, he now specialised more and more in printing liturgical works for hwich church commissions assured him a solid market.

"From Venice, Ratdolt brought various innovations to Augsburg which he had developed himself or adopted form others. With this broadside, Ratdolt advertised the diversity of fronts available in his printing house. The print, preserved only in the copy shown, is dated to 1 April 1486 and may have been produced while Ratdolt was still in Venice. It contains samples of 14 different fonts, of which ten use gothic letters, three humanist Roman and one Greek script, in a range of sizes. Among the gothic fonts, the Italian rotunda was used mainly for printing liturgical works. Besides advertising his well-equipped press, Ratdolt took the opportunity to praise himself amply as a man of great-ability (vir solertissimus) famous in Venice for his great talent and amazing skill (preclaro ingenio et mirifica arte. . .celbratissimus), who was now ready to publish books of examplary quality in the imperial city of Augsburg" (Wagner, Als die Lettern laufen lernten. Medienwandel im 15. Jahrhundert (2009) no. 40).