This detail from the Catalan Atlas includes the first compass rose depicted on a map. Notice the Pole Star set on N. 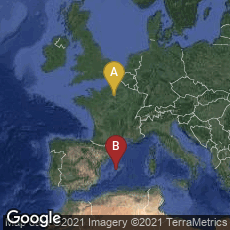 The Catalan Atlas, One of the Most Beautiful Medieval Atlases

In 1375 the Catalan Atlas (Atles català), an exquisitely beautiful cosmography, perpetual calendar, and thematic representation of the known world, was produced by the Majorcan cartographic school. Creation of the atlas has been attributed to Cresques Abraham (Abraham Cresques), a Jewish cartographer from Palma, Majorca (Mallorca).

"The Catalan Atlas originally consisted of six vellum leaves folded down the middle, painted in various colors including gold and silver. The leaves are now cut in half. Each half-leaf is mounted on one side of five wooden panels. The first half of the first leaf and the second half of the last leaf are mounted on the inner boards of a brown leather binding. Each measures approximately 65 × 50 cm. The overall size is therefore 65 × 300 cm.

"The first two leaves contain texts in Catalan language covering cosmography, astronomy, and astrology. These texts are accompanied by illustrations. The texts and illustration emphasize the Earth's spherical shape and the state of the known world. They also provide information to sailors on tides and how to tell time at night.

"The four remaining leaves make up the actual map, which is divided into two principal parts. The map shows illustrations of many cities, whose political allegiances are symbolized by a flag. Christian cities are marked with a cross, other cities with a dome. Wavy blue vertical lines are used to symbolize oceans. Place names of important ports are transcribed in red, while others are indicated in black.

"Unlike many other nautical charts, the Catalan Atlas is read with the north at the bottom. As a result of this the maps are oriented from left to right, from the Far East to the Atlantic" (Wikipedia article on Catalan Atlas, accessed 01-11-2013).

An authoritative reference is The Creques Project of Gabriel Llompart and Jaume Riera, accessed 10-11-2013).