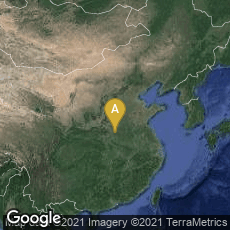 "Representative pottery and bronze vessels dating to the Neolithic period and the Shang/Western Zhou Dynasties, showing selective analyses of their contents. (a) Typical Neolithic storage jar from Jiahu (no. T109:65, subperiod II, ca. 6600–6200 B.C.). (b) Lidded he “teapot” from Anyang (Liu Jiazhuang Tomb, no. M1046:2, ca. 1250–1000 B.C.). (c) GC-MS analysis of chloroform extract of a, showing homologous series of n-alkanes. (d) HPLC-MS analysis of chloroform extract of c, showing the presence of β-amyrin; oleanolic acid was attested at 8.9 min." (https://www.pnas.org/content/101/51/17593.full).

Chemical analyses of ancient organic compounds absorbed into pottery jars from the early Neolithic village of Jiahu in Henan province in China show that a mixed fermented beverage of rice, honey, and fruit (hawthorn fruit and/or grape) was being produced about 7000 BCE. The rice was probably prepared for fermentation by mastication or malting,

"This prehistoric drink paved the way for unique cereal beverages of the proto-historic second millennium B.C., remarkably preserved as liquids inside sealed bronze vessels of the Shang and Western Zhou Dynasties. These findings provide direct evidence for fermented beverages in ancient Chinese culture, which were of considerable social, religious, and medical significance, and help elucidate their earliest descriptions in the Shang Dynasty oracle inscriptions.

"Throughout history and around the world, human societies at every level of complexity discovered how to make fermented beverages from sugar sources available in their local habitats. This nearly universal phenomenon of fermented beverage production is explained by ethanol's combined analgesic, disinfectant, and profound mind-altering effects. Moreover, fermentation helps to preserve and enhance the nutritional value of foods and beverages. Because of their perceived pharmacological, nutritional, and sensory benefits, fermented beverages thus have played key roles in the development of human culture and technology, contributing to the advance and intensification of agriculture, horticulture, and food-processing techniques. Among all strata of society, they have marked major life events, from birth to death, as well as victories, auspicious events, and harvests, etc. Rulers and “upper class” individuals with leisure and resources particularly were drawn to feasting on a grand scale, which often featured special fermented beverages served in and drunk from special vessels. In their most developed form, such celebrations were formalized into secular or religious ceremonies for the society at large.

"How does ancient China, one of the primal centers for the rise of human civilization, fit into this picture of fermented beverage production, conspicuous consumption, and celebratory and ritual activities that are so well documented archaeologically, historically, and ethnographically elsewhere? Based on the oracle inscriptions from the late Shang Dynasty [circa (ca.) 1200–1046 before Christ (B.C.)], the earliest texts from China, at least three beverages were distinguished: chang (an herbal wine), li (probably a sweet, low-alcoholic rice or millet beverage), and jiu (a fully fermented and filtered rice or millet beverage or “wine,” with an alcoholic content of probably 10–15% by weight). According to inscriptions, the Shang palace administration included officials who made the beverages, which sometimes were inspected by the king. Fermented beverages and other foods were offered as sacrifices to royal ancestors in various forms of bronze vessels, likely accompanied by elite feasting. Later documents, incorporating traditions from the Zhou period (ca. 1046–221 B.C.), describe another two beverages: luo (likely made from a fruit) and lao (an unfiltered, fermented rice or millet beverage or the unfermented wort).

"A much earlier history for fermented beverages in China has long been hypothesized based on the similar shapes and styles of Neolithic pottery vessels to the magnificent Shang Dynasty bronze vessels, which were used to present, store, serve, drink, and ritually present fermented beverages during that period. By using a combined chemical, archaeobotanical, and archaeological approach, we present evidence here that ancient Chinese fermented beverage production does indeed extend back nearly nine millennia. Moreover, our analyses of unique liquid samples from tightly lidded bronze vessels, dated to the Shang/Western Zhou Dynasties (ca. 1250–1000 B.C.), reveal that refinements in beverage production took place over the ensuing 5,000 years, including the development of a special saccharification (amylolysis) fermentation system in which fungi break down the polysaccharides in rice and millet" (Patrick E. McGovern, Juzhong Zhang, et al, "Fermented beverages of pre-and proto-historic China," Proceedings of the National Academy of Sciences of the United States of America, Published online before print December 8, 2004, 101, no. 51, December 21, 2004, 17593-17598.)