Distribution of tablets on room shelves. 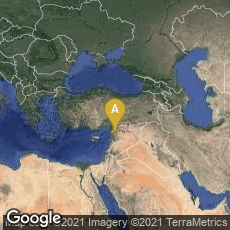 The Palace Archive of Ebla, Syria

Between 1974 and 1975 Italian archaeologist Paolo Matthiae from the University of Rome La Sapienza and his team discovered up to 1800 cuneiform tablets and 4700 fragments, and many thousand minor chips, representing the palace archives of the ancient city of Ebla, Syria. The city of Ebla, long known from Egyptian and Akkadian inscriptions, had been discovered by Matthiae in 1968.

Collectively, the tablets discovered at Ebla have come to be known as the Ebla tablets. Found in situ on collapsed shelves, the tablets retained many of their contemporary clay tags, by which they could be referenced by original users.

"About 80% of the tablets are written using the usual Sumerian combination of logograms and phonetic signs, while the others exhibited an innovative, purely phonetic representation using Sumerian cuneiform of a previously unknown Semitic language, which was called Eblaite. Bilingual Sumerian/Eblaite vocabulary lists were found among the tablets, allowing them to be translated. Giovanni Pettinato and Mitchell Dahood believed the Eblaite language was West Semitic, however I. J. Gelb and others believed it was an East Semitic dialect, closer to the Akkadian language. Now it is commonly accepted that Eblaite is part of the East Semitic branch of Semitic, and very close to the Akkadian language."

"It now appears that the building housing the tablets was not the palace library, which may yet be uncovered, but an archive of provisions and tribute, law cases and diplomatic and trade contacts, and a scriptorium where apprentices copied texts. The larger tablets had originally been stored on shelves, but had fallen onto the floor when the palace was destroyed. The location where tablets were discovered where they had fallen allowed the excavators to reconstruct their original position on the shelves: it soon appeared that they were originally shelved according to subject" (Wikipedia article on Ebla, accessed 01-12-2013).

The Ebla tablets are preserved in Syrian museums in Aleppo, Damascus, and Idlib.