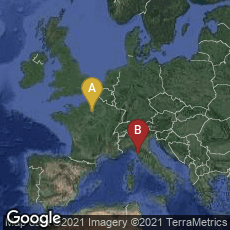 The Double Publication of the Double Elephant Folio of Anatomy: Mascagni & Antommarchi This and the other 3 images reproduced here are from Antommarchi's Paris edition.

Considering that it is among the rarest of all anatomies, and certainly the largest, it is remarkable that two nearly identical editions of Paolo Mascagni’s posthumous life-size anatomy were published almost simultaneously. From 1823 to 1826 Francesco Antommarchi, a physician and anatomist of Corsican descent, issued from Paris Planches anatomiques du corps humain executes d’après les dimensions naturelles. This huge work contained 83 lithographed plates of which 48 were hand-colored and 35 were outline keys. The uncut sheets of the atlas measured 970 x 650 mm., or 25.5 x 38.25 inches. To accompany these plates Antommarchi published a folio text (Explication des planches anatomiques . . . in normal folio size with sheets 545 x 350 mm. or 21.5 x 13.75 inches.

An edition with engraved plates was also published in Pisa under the title Anatomia universa (1823-32). Though the two editions were printed by different processes, the image quality of the two is remarkably similar and it is debatable which is superior from either the artistic or scientific standpoint. In an hommage to Vesalius, Antommarchi had imaginary landscape backgrounds created for the base of his musclemen. These did not appear in the Italian edition. There are other subtle differences: Antommarchi included letter keys within the images of some of the less-complex plates, eliminating the need for outline plates to those images. He also published more anatomical plates than the Italian edition, and, of course, his text was substantially different.

The publication history of these two editions is complex and usually misunderstood. The Paris edition was issued in 15 parts between 1823 and 1826 by the lithographic press of the Comte de Lasteyrie, one of the two founders of lithography in France (the text volume, issued in 1826, bears the imprint of Lasteyrie’s successor, R. Brégeaut). The atlas, with magnificent plates printed on single broadsheets measuring 970 x 650 mm., is comparable in size to the double elephant folio edition of Audubon’s Birds of America (1827-38), which measures about 985 x 660 mm.

Antommarchi's work is undoubtedly the largest lithographically printed book issued during the incunabula period of lithography. It is also the second anatomical atlas ever reproduced through the medium of lithography, overlapping in its years of publication with the Anatomie de l'homme ou descriptions et figures lithographes de toutes les parties du corps humain by the artist/anatomist Jules Germaine Cloquet, which was issued in five normal-sized folio volumes, also in Paris at the presses of Engelmann and de Lasteyrie from 1821 to 1831.

Antommarchi's atlas was issued in both colored and uncolored versions; according to the historian of anatomical illustration Ludwig Choulant, writing in the 1840s when copies of both editions may have remained available from the publishers, copies with colored plates could be purchased for 1050 francs and uncolored copies for 375 francs.

The preface to the text volume of the lithographed edition, written by Antommarchi, and personally signed by him on the verso of the title page, provides valuable information about this work’s publication history. Antommarchi studied under the great Italian anatomist Paolo Mascagni, and at the time of Mascagni’s death was serving as his prosector, responsible for preparing dissections for demonstration. During his career Mascagni spent a great deal of his time, energy and money in the production of a life-sized human anatomy, titled Anatomia universa, which he intended to have printed using engraved copperplates; this required meticulous preparation of very large copperplates for the work’s enormous images. Some scholars have suggested that Mascagni was hoping to have this work printed in color by the Le Blon / Gautier d’Agoty process; however, that process of color-printing mezzotints would not have been able to reproduce Mascagni’s drawings in sufficient detail. At his death Mascagni left this project unfinished, along with two others: an illustrated anatomy for sculptors and painters; and a treatise on the tissues of animals and plants intended as an introduction or “Prodromo” to the Anatomia universa. These manuscripts he put in the hands of Antommarchi, who was left in charge of publishing these three works on behalf of the Mascagni family.

In 1816 Antommarchi issued Mascagni’s anatomy for artists, edited by the author’s brother and grandson, under the title Anatomia per uso degli studiosi di scultura e pittura. According to Antommarchi’s preface to the present work (pp. iii-iv), the uncompleted works by Mascagni that remained after the publication of Anatomia per uso degli studiosi consisted of the following:

[1. Thirty shaded plates, engraved on copper and not completed, of his grand Anatomy;

2. Fifteen outline plates, almost all engraved on the backs of the shaded plates. A multitude of faults and errors have slipped in during the engraving, even though they were made during the lifetime of this famous man [Mascagni], and from drawings as detailed as they were exact;

3. Nineteen plates engraved on copper, with several manuscript notebooks intended to serve as the prodrome or introduction to the grand Anatomy;

4. A certain number of anatomical drawings and manuscript notebooks on descriptive aantomy and rural economy.]

Since the publication of the Prodromo and the grand anatomy would require a large sum of money, a private company was formed, with the Mascagni family’s permission, to supply the necessary funds. As Antommarchi states in his preface (p. iv),

Antommarchi issued the Prodromo in 1819. In the meantime he had been appointed physician to Napoleon, then in exile on the remote island of St. Helena, and on 10 September 1819 he was sent to St. Helena to provide medical care to the deposed emperor. It is possible that Napoleon requested Antommarchi’s services because, like Napoleon, Antommarchi was Corsican by birth. Antommarchi brought copies of Mascagni’s plates for the grand anatomy to St. Helena, and continued working on the project in his spare time. Napoleon took a great interest in the anatomy and even consented to have it dedicated to him; however, the emperor died in May 1821, prior to the completion of Antommarchi’s editorial labors. Antommarchi directed Napoleon’s autopsy, cast Napoleon’s death mask, and later published best-selling books about his experiences with the late emperor. Since he could not dedicate his edition to the living man, in homage to Napoleon’s memory, and in reference to the isolation of Napoleon’s remains on the remote island, Antommarchi dedicated his edition of Mascagni’s grand anatomy to the emperor’s tomb on St. Helena. (Napoleon’s body remained on the island until 1840, when it was moved to a tomb created for him in Paris.)

Upon Antommarchi’s return to Italy, as he recounts in his preface (p. v), he received an offer from the private company and Mascagni’s heirs,

[where they proposed to surrender to me in totality the copies of the Prodrome, the copperplates for that work, those of the grand Anatomy, as well as all the papers relating to it. They asked the sum of eight thousand Tuscan crowns, to be paid over time, for which they would take suitable security. The Mascagni family, convinced that it would be advantageous to the buyer of these two works to have the copperplates and remaining copies of [Mascagni’s] “Treatise on the lymphatic vessels” [1787] and the artists’ anatomy, also proposed that I purchase these works for half the sum indicated on the prospectus.]

Before this could be accomplished, however, Antommarchi was informed by M. Moggi, one of the private company’s representatives, that the company had decided not to go through with the deal, and that it wanted to dissolve itself. Antommarchi then went to Florence to propose another arrangement with the Mascagni family:

[I next spoke to the Mascagni family and offered them seven thousand five hundred crowns in place of the six thousand five hundred that the company would have paid them. We were soon in agreement, the papers were drawn up and ready to be signed; but Moggi, who was the prime mover in this whole affair, had different ideas. Authorities intervened and refused to sanction the transaction. “Since you are forbidding me to purchase, then you take over.—We don’t want to.—My work?—You have it.—I will use it.—You are free to do so.—Let us quit.—We ask nothing better.” This was done; we appeared before the magistrate, who declared the company dissolved. But the operation had already passed into other hands; I could not have it for seven thousand five hundred crowns: they had sold it for three thousand. The Mascagni family was paid off, I owed nothing to the new company; I prepared to take advantage of my work.]

The Mascagni family sold the copperplates of the grand anatomy to three professors at Pisa who began preparing their own edition of the work; this edition, containing 44 engraved illustrations and 44 outline plates (compared to 48 hand-colored plates and 35 outline plates called for in our edition) was published between 1823 and 1832 under the title Anatomia universa. In the meantime Antommarchi proceeded to Paris where he arranged to have his versions of the Mascagni plates lithographed by de Lasteyrie and issued under the title Planches anatomiques du corps humain. It is clear from his preface that Antommarchi believed he had full authority to publish his edition which, because of his close working relationship with Mascagni, may be closer to Mascagni’s original intention than the Italian version. Choulant, who provided an incorrect collation of Antommarchi’s edition, objected to the fact that Antommarchi left Mascagni’s name off the title page, but otherwise appears to have agreed. If one thinks of the Anatomia universa, edited by the three Pisa professors, as an adaptation of Mascagni’s plates according to the ideas of the three editors, he may, on the other hand, look upon Lasteyrie’s lithographed edition as Antommarchi’s adaptation, evidently prepared by him at St. Helena for his edition of Mascagni’s plates (Choulant, p. 319).

Complete sets of Antommarchi’s edition, with both the text and all the plates, are extremely rare, especially with the plates hand-colored. In 2012 OCLC and the Karlsruhe Virtuelle Katalog cited four copies of the text and atlas in American libraries (U. Chicago, National Library of Medicine, U. Minnesota and the College of Physicians in Philadelphia) plus six copies in France (Bibliothèque Nationale, Bibliothèque St. Geneviève, Paris BIUM, Bordeaux, U. Reims and U. de Lille), a copy at the British Library and four other European copies (Sachsische Landesbib., U. Leiden, Berlin, Halle). The library database records for these copies did not indicate whether the atlas plates were colored or black and white.