The serekh of Narmer from the verso of the Narmer Palette. Serekhs bearing the rebus symbols n'r (catfish) and mr (chisel) inside, being the phonetic representation of king Narmer's name, circa 3100 BC.[4]

The serekh of Narmer from the verso of the Narmer Palette. 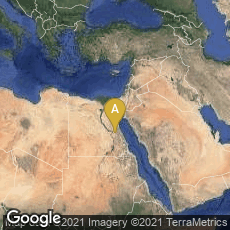 The Earliest Precursors to Writing in Egypt are Rock Drawings Serekh of Djet, also known as Wadji, Wadj, Iti and Oenepes, from the 1st dynasty, preserved in the Louvre. "A serekh was normally used as a royal crest, accentuating and honouring the name of the pharaoh. Its use can be dated back as early as the Gerzeh culture (c. 3400 BC.). The hieroglyphs forming the king's name were placed inside a rectangular extension atop the serekh, which represented the royal courtyard. Additionally, the falcon of the god Horus, or in a few cases the Set animal, topped the serekh, showing the celestial patron of the named king.[1][2][3]"

"Rock drawings constitute the earliest of the presursors to writing in Egypt. Drawings date from the earliest habitation of the Nile valley to the Islamic period, but the most salient early examples date to the Naqada I period (ca. 3750-3500 BC). They are located in the Eastern Desert along principle routes to the Red Sea (e.g., the Wadi Hammamat), and in the Western Desert along important land routes (e.g., the Theban Desert Road). Among the more popular motifs displayed are boats, animals and humanoid figures with feathers. Their composition is seemingly narrative, but their meaning is difficult to ascertain.

"There are rare examples of rock art of the late Predynastic period that can be interpreted. The 1936-1938 expeditions of Hans Winkler yielded a serekh (rectangular enclosure with the king's Horus name and a niched facade, surmounted by a falcon) of King Narmer (before ca. 3150 BC) at the site of Wadi el-Qash, in the Eatern Desert. This inscription is composed of an abbreviated version of King Narmer's name (only the nar-catfish is written; the mr-chisel has been left out) within a serekh, and constitue the only definite example of writing from this corpus at such an early date in Egyptian history.

"In general, during the Predynastic period the distinction between purely pictorial rock drawings and hieroglyphic writing is very hard to make. Although the motifs foreshadow those of subsequent periods of Egyptian history, aside from the example at Wadi-el-Qash there are no clear attempts at writing during the Predynastic period presently known to scholars. Instead, these spectacular scenes, carved into living rock, remain frustratingly ambiguous" (Elise V. Macarthur, "The Concept and Development of the Egyptian Writing System," IN: Woods (ed), Visible Language. Inventions of Writing in the Ancient Middle East and Beyond [2010] 116-117, illustrating the drawing with serekh of King Narmer).