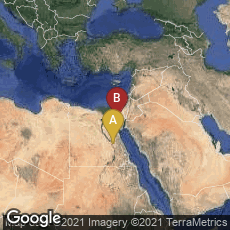 The Proto-Sinaitic Inscriptions, the Earliest Evidence for Alphabetic Writing Drawings of the first known Proto-Sinaitic inscriptions, as published in "The Egyptian Origin of the Semitic Alphabet", by Alan H Gardiner, 1916-01-31

The Proto-Sinaitic inscriptions, first discovered at Serabit el-Khadem (Serabit el-Khadim), an ancient Egyptian turquoise mining site in the Sinai Peninsula, by W. M. Flinders Petrie in 1905, and supplemented by additional finds in subsequent decades, represent the earliest evidence for alphabetic writing. They consist of linear pictographic symbols inscribed on statuettes, stone panels, and rock faces. In the 1994-95 John Coleman Darnell and Deborah Darnell, who started searching along caravan trails in the Western Desert west of Luxor in the Theban Desert Road Survey, discovered two single-line rock inscriptions at Wadi el-Hol, near Thebes in Upper Egypt. Those inscriptions are written in a script that closely resembles the Proto-Sinaitic texts from Serabit el-Khadem.

Joseph Lam, "The Invention and Development of the Alphabet," IN: Wood (ed) Visible Language: Inventions of Writing in the Ancient Middle East and Beyond (2010) 189-95, illustrating one of the inscriptions as No. 89 on p. 196.