Mummified corpse of Ötzi the Iceman.

The most important item of the Iceman’s equipment is his copper-bladed axe.

The two separate leggings, which the Iceman was still wearing when he was discovered, are made of several pieces of domestic goat hide carefully cross-stitched together with animal sinew. 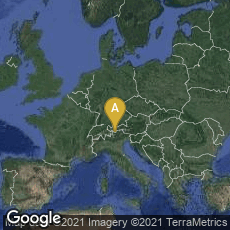 Model of Ötzi the Iceman in exhibit at the South Tyrol Museum of Archaeology.

In September 1991 Ötzi, also called Ötzi the Iceman, the Similaun Man, the Man from Hauslabjoch, Homo tyrolensis, and the Hauslabjoch mummy, was discovered  in the Ötztal Alps near the Mt. Similaun and Hauslabjoch on the border between Austria and Italy. Radiocarbon tests consistently dated the body and associated objects within a range of 3365-2940 BCE. Because the body was preserved in ice for over 5000 years it had only partially deteriorated when it was discovered.

"Anthropologists are particularly interested in the items found with him, which constitute a unique time-capsule of the stuff of everyday life, may of them made of organic materials that were preserved by the cold and ice. An astonishing variety of woods, and a range of very sophsticated tecyniques of work with leather and grasses can be seen in the collection of seventy objects that have added a new dimension to our knowledge of the period.

The axe, 60 cm (24 in) in length, has a head of copper that was bound to the yew-wood handle with leather thongs. The bow, of yew wood, was almost 180 cm. (6 ft) long. One side is flat, the other rounded. Its odour at room temperature suggests it was smeared with blood or fat to keep it pliable. A quiver of deerskin contained fourteen arrows, only two of which were ready for use. Their 75 cm (30 in) shafts, made of two pieces, were of dogwood and viburnum wood, and had points of stone or bone fixed to them by pitch. The two finished arrows had double-side points of flint and triple feathering whose placement meant the missiles would spin in flight and indicates an advanced ballistic design. The quiver also contained an untreated sinew (possibly for use as a bowstring), a ball of fibrous cord ,bone or antler spines tied togehter with grass, and various objects of flint and bone, together with pitch - it may ahve constituted some kind of repair kit.

"The dagger or knife has a sharp flint blade, only about 4 cm (1.5 in) long set into an 8 cm (3 in) ash-wood handle. Polish on the blade indicates that it was used to cut grass. A woven grass sheath was also found. What was orignally assumed to be a stone-pointed fire-striker was found to be a thick 'pencil' of linden wood with a central spine of bone, probably used for retouching and sharpening flint objects. A U-shaped stick of hazel and two cross-boards of larch are thought to be the frame of a backpack that may have contained some animal bones and residues of the skin of chamois and other small animals, found nearby: blood residues from chamois, ibex and deer have been found on some of the implements" (Paul G. Hahn (ed) 100 Great Archaeological Discoveries [1995] 85).

Ötzi's body and belongings are preserved in the South Tyrol Museum of Archaeology in Bolzano, South Tyrol, Italy.