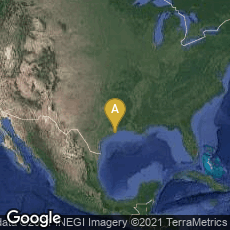 Image Source: sanctuaries.noaa.gov
Three-dimensional sonar scan showing remains of the USS Hatteras protruding above the seabed as surveyed in late 2012.

On January 11, 1863 the USS Hatteras, an iron-hulled steamship converted into a gunboat by the U.S. Navy, was taken by surprise and sunk in an engagement  with the disguised Confederate commerce raider CSS Alabama, approximately 20 miles off the coast of Galveston, Texas.

The hull of Hatteras rests in approximately 60 ft (18 m) of water  and is buried under about 3 ft (0.91 m) of sand. Her steam engine and two iron paddle wheels remain on the ocean bottom. The wreck is monitored to ensure that it is not damaged by oil and gas development in the area.

On January 11, 2013, 150 years after the battle, a 3-D sonar map was released by NOAA's (the National Oceanic & Atmospheric Administration) Office of National Marine Sanctuaries, together with ExploreOcean, Teledyne Blueview, and Northwest Hydro showed never-before seen details of the USS Hatteras, the only Union warship sunk in combat in the Gulf of Mexico during the Civil War.