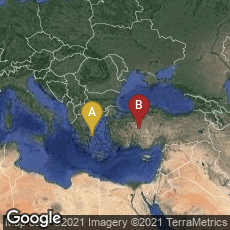 A: Peristeri, Greece, B: Ankara, Turkey

From the Schøyen Collection: Ancient Greek amulet MS 5236 invoking the god Phoebus Apollo. Dating to the 6th century BC, the gold lamella is an early example of a block print.

MS 5236 in the Schøyen Collection in Oslo, Norway, is the only known ancient Greek magic amulet printed with a text that was stamped rather than incised. It is also the only extant specimen of Ephesia grammata made of gold. It contains a partially comprehensible invocation of the god Phoebus Apollo, and may have been composed in central Greece or Asia Minor.

"The special significance of MS 5236 lies in the way the inscription was created. A close examination shows that a blind-stamping process was used to reproduce the Greek text on the lamella, with a single matrix carrying the whole text. In this, MS 5236 differs fundamentally from other amulets of the time, where the magic formulas were incised by hand, such as with a stylus, into the metal foil.

"The entire process is reconstructed by [Herbert] Brekle as follows: First, the inscription's text was engraved with an iron stylus into an even copper or bronze block, with its letters facing the opposite direction and running from right to left. The displaced material rose up on both sides of the letter grooves forming two sharp, parallel ridges. In the second step, the inscribed side of the stamp block was placed on the plane gold sheet and sufficient pressure, either manually or by hammering onto a plate laid on top, was exerted from above to transmit the text. What produced the print image were the ridges caused by the material displacement; these left shallow double lines in the foil, thus creating the text. The actual, sunken letter lines were not transferred during the imprinting procedure, since they did not enter the surface of the foil.

"It is the existence of these fine double grooves on the gold lamella which provides the key for identifying MS 5236 as being stamped and not written. Because it is a matter of mechanical necessity that the engraved letters appear with their raised double edges on the substrate as parallel, sunken lines when being printed, as can be observed on the amulet. Thus, the inscription is a bas-relief, which was produced by a bas-relief stamp.

If the text had been carved directly into the foil as with other amulets, the stylus could have left only simple lines. According to Brekle, the applied printing technique has much in common with the later method of drypoint etching, by which an image is incised into a copper plate; however, unlike drypoint, MS 5236 is a colourless blind print.

"A further indication for the use of a printing technique is the varying strength of the letters, which suggests that the surface of the lamella was not completely flat during printing. Thus, the outline of the letters, as to be expected with a print, appear in the slightly more elevated regions of the sheet (darker areas in the photo), more distinct than in the slightly deeper regions (lighter areas) that were not affected by the full force of the stamp. This can be observed particularly along the folds and in the last line where the edge of the foil was apparently slightly bent downwards while being printed. Consequently, the impressions of the letters appear less marked here. If the text had been directly inscribed with a stylus into the foil, these variations would not have occurred.

"Regarding the stroke order of the letters on the stamp, it can be said that the Hasta, the mostly vertical main line, was normally executed before the Coda figures. MS 5236 is an overall rare and possibly unique print from the early Greek era. Despite this, the widespread use of magical amulets indicates that such block prints were, at least from the present prototype, mass-produced at that time" (Wikipedia article on MS 5236, accessed 01-19-2013)

Printing by Handpress or by Hand
Survival of Information / Philology
Archaeology