Death of Henry II in Paris, 1559. In a tournament Henry received a fata; blow to his eye from a lance, but he did not die immediately. The woodcut shows him on his deathbed with his family. In the center of the room we see his physicians, Ambroise Paré and Andreas Vesalius. As famous as these physicians were, they could do little except preside over the king's death. 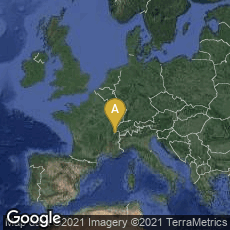 Wars, atrocities, and religious controversies of the 16th century resulted in vivid and sometimes horrifying images. These were evoked and recreated for audiences far and wide through the relatively new medium of printing, in what might be loosely called "news publishing." Initially the focus was not on immediately current events, but by the second half of the sixteenth century publishers issued a wider range of maps, diagrams, and illustrations of recent battles, sieges, and executions. Most of these were sold as single-sheet broadsheets for very low prices, affordable to virtually anyone who was literate, and comprehensible to a certain extent, even to the illiterate, through their graphic images. As ephemera their survival rate was low.

Between 1569 and 1570 French painter, engraver and architect Jean Perrissin, French printmaker Jacques Tortorel, and French printmaker Jacques Le Challeux — all Protestants (Huguenots) who had fled to Geneva to escape religious persecution in France— undertook a more elaborate project, publishing from Geneva an album of prints entitled Premier volume. Contentant quarante tableaux ou histoire diverse qui son memorables touchant les guerres, massacres & troubles advenus en France en ces dernieres annees. Le tout receuilli selon le tesmoignage de ceux qui y on esté en personne, & qui les on veus, lesquels son pourtrais à la verité. (First Volume, Containing Forty Tableaux or Diverse Memorable Histories Concerning the Wars, Massacres and Troubles that have Occurred in France in These Last Years. All Gathered from the Testimony of Those Who Were There in Person and Saw Them, and Truly Portrayed.) The images, of which some were copperplate engravings and some of which were woodcuts, consisted of the elaborate engraved title page and thirty-nine images, each measuring roughly 32 x 50 cm, depicting significant "wars, massacres, and troubles" in the French Wars of Religion between 1559 and 1570. The images had large subject headings in their upper margins, and alphabetical keys to extensive captions explaining what happened in each image. Perhaps because this series of prints was issued as a portfolio, presumably for a higher price than would have been charged for single news prints, these prints have had a higher survival rate than many ephemeral news prints of the time.

Remarkably the contract for this project between Perrissin, Le Challeux and the Geneva publishers Nicolas Castellin and Pierre le Vignon, drawn by the Genevan notary Aimé Santeur and signed on April 18, 1569, remains preserved in the archives of Geneva.

Typically attributed to Perrissin and Tortorel, as they were the artists who signed most of the plates, this work was:

"the first extended print series offering a pictorial account of recent events where the images do not simply illustrate a written history but carry the burden of telling the story themselves, and that was intended not to glorify a ruler's deeds but to show a broad general public the events of their time" (Philip Benedict, Graphic History. The Wars, Massacres and Troubles of Tortorel and Perrissin [2007] 4).

"Like so many works in this century when printing was still new and the Renaissance and Reformation were destabilizing old cultural forms and encouraging new ones, the Quarante Tableaux was an experimental work. It was experimental in the sense that it was produced by a group of artists and entrepreneurs with no prior experience in producing such a work. It was experimental in the more profound sense that no exact generic precedents could guide the series. Some earlier graphic works had sought to carry a historical narrative through pictures and accompanying text, but these were typically accounts of the victories of a great ruler, containing a strong element of panegyric. In proclaiming their goal to be the presentation of an impartial eyewitness view of the events in question, the makers of the Quarante Tableaux took this emerging genre in a new direciton, one inspired by both the growing market for single-sheet news prints that claimed to offer true portraits of individual events, and the prevailing rhetoric of written historiography in Geneva. . . The manner in which the creators of the series chose to relate printed text to image further heightened this indeterminacy or open-ended-ness. Reliance on Protestant networks of information recurrently subverted the creators' proclaimed goal of offering an impartial view of events, yet they used multiple informants and made a clear effort to transcend a purely partisan or one-sided view of events. The end result was a complex, even internally contradictory work that invited different forms of appropriation" (Benedict 10-11).

"The episodes depicted in the volume run from the special meeting of the Parlement of Paris in June 1559 at which Anne Du Bourg spoke out before Henry II against the harsh repression of Protestanism through a minor skirmish betwwen Huguenot and Catholic forces along the Rhône in March 1570. The first dozen or so plates show the events that led up to the outbreak of open civil war in spring 1562. The remainder of the series is composed of events from the first three French Wars of Religion (1562-1563, 1567-1568, 1578-70). Above all it is a compendium of battles (15 pictures), sieges (5 pictures, raids (4 pictures) and massacres (3 pictures-5 if the massacres prior to the outbreak of the First Civil War are included)" (Benedict 6).

Benedict reproduces all the images in fold out plates with commentaries on each image on facing pages so that the commentary may be studied with the image. In an appendix he also reproduces the original publishing contract for the work.  Through records of the quantity of paper that the publisher Castellin purchased during the printing Benedict shows that the work was a commercial success, and he traces different states of several of the prints with texts in different languages. Whether a second volume was planned remains unknown, though indication of "Premier volume" on the title page would imply as much. Unfortunately, any such project was definitively cut short by an outbreak of plague in Geneva in 1571, which killed three of Pierre Le Vignon's four children, and also killed Castellin and his three children.  Prior to that outbreak the artists Perrissin, Tortorel and Le Challeux had returned to France in 1570 once the Peace of Saint-Germain ended the civil war, and retored rights of worship in France.