The mammoth carving was found in 2007 in the spoil from a dig in 1931 by Riek.  Photo: Universität Tübingen. (Click on image to view larger.) 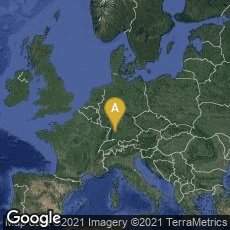 The Earliest Known Carving of a Mammoth 37mm long, 7.5 gram figurine, made from mammoth ivory is some 35,000 years old. It is one of the oldest pieces of art ever found.  Photo: Universität Tübingen. (Click on image to view larger.)

In 2007 Nicholas J. Conard of the University of Tübingen reported that his team discovered an intact carving of a woolly mammoth from the excavations collected from Vogelherd Cave, about 1 km northwest of Stetten-ob-Lontal, Baden-Württemberg, Germany. The cave was known to contain primitive artifacts since it was excavated by Tübingen archaeologist Gustav Riek in 1931. The mammoth carving, dated to roughly 33,000 BCE was found among 7,000 sacks of sedment dug out of the cave by Riek and his crew about eighty years earlier.

"The figure of the woolly mammoth is tiny, measuring just 3.7 cm long and weighing a mere 7.5 grams, and displays skilfully detailed carvings. It is unique in its slim form, pointed tail, powerful legs and dynamically arched trunk. It is decorated with six short incisions, and the soles of the pachyderm's feet show a crosshatch pattern. The miniature lion is 5.6 cm long, has a extended torso and outstretched neck. It is decorated with approximately 30 finely incised crosses on its spine.

"The geological context of the discoveries and radiocarbon dating indicate that the figurines belong to the Aurignacian culture, which refers to an area of southern France and is associated with the arrival of the first modern humans in Europe. Multiple radiocarbon dates from sediment in the Vogelherd Cave yielded ages between 30,000 and 36,000 years ago, the University of Tübingen reports. Some methods give an even older date" (http://www.spiegel.de/international/zeitgeist/ice-age-art-35-000-year-old-mammoth-sculpture-found-in-germany-a-489776.html, accessed 01-22-2013).