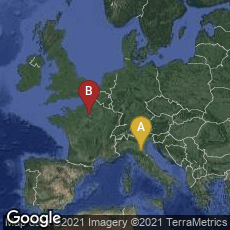 The Earliest Printings of Plato Copy of the portrait of Plate made by Silanion c. 370 BCE for the Academia in Athens. From the sacred area in Largo Argentina. Preserved in the Capitoline Museum, Rome.

During the fifteenth century all printings of Plato were in Latin, beginning in 1472 with an edition of the Epistolae (Letters) issued in Paris by Ulrich Gering, Martin Crantz and Michael Friburger, who set up the first press in France at the University of Paris. This edition, of which ISTC No. ip00773000 records only four copies, is one of the rarest of incunabula. Next was the Apologia Socratis (Apology of Socrates) and Gorgias translated from the Greek by humanist Leonardo Bruni (Leonardus Brunus Aretinus) and printed in an undated edition in Bologna by an unknown printer called by bibliographers the "Printer of Barbatia, 'Johannina' (H 2429*)" and estimated to have been issued about 1475 (ISTC No. ip00775000). A few of the recorded copies consist of only one or the other of the two dialogues, suggesting that perhaps 15th century customers could purchase one or the other separately.