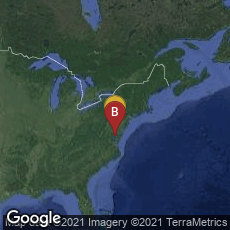 The First Licensed Woman Printer in North America Was Illiterate In 1685 printer William Nuthead set up the first press south of Massachusetts, in St. Mary's City, Maryland. There he printed forms for the government. After William's death in 1695 his widow, Dinah, continued the printing business, and when the capital of Maryland moved to Annapolis that year Dinah also moved her press.

"Dinah Nuthead, the widow of William, was a woman of admirable courage. . . . Entirely without education, not well provided with money, she yet made plans to carry on a business in which some knowledge of letters and a certain amount of capital is usually regarded as indispensable. She was shrewd enough to realize, however, that if she were successful in finding a journeyman printer to conduct her establishment, the possession of that rare article, a printing press, would surely provide a decent maintenance for herself and her two children. Boldly she made the venture" (Wroth, A History of Printing in Colonial Maryland 1686-1776 [1922], 12-13).

On May 5, 1696 Dinah Nuthead petitioned to be licensed to print forms for the government, and eight days later her petition was granted:

" 'Dinah Nuthead of Ann Arundell County Widow, Robert Carvile, and William Taylard of St. Maries County Gentn' gave bond to the Governor to the amount of 100 pounds for the good behavior of Dinah Nuthead in the operation of her press. The Instrument continues as follows:

" 'Now the Condition of this Obligation is such that if the said Dinah Nuthead shall exercise and Imploy her printing press and letters to noe other use than for the printing of blank bills bonds writts warrants of Attorney Letters of Admrcon and other like blanks as above - sd nor Suffer any other person to make use thereof any otherwise than aforesd Unless by a particular Lycense from his Exncy the Governor first had and obtained And further shall save harmless and indempnifye his sd Exncy the Governor from any Damage that may hereafter Ensue by the said Dinah Nuthead misapplying or Suffering to be misapplyed the aforesd Printing press or letters otherwise than to the true intent & meaning before expressed, Then this Obligation to be Voyd or else to Remain in full force and Virtue.'

"This fearsome instrument for the protection of the Province against the evils of indiscriminate printing was signed by certain witnesses, by the two bondsmen and by the principal, who, as one observes, was compelled to make her mark instead of signing her name to the document, a disability under which she labored to the end of her days. Clearly Dinah Nuthead herself could not have intended to act as the compositor in the establishment which she had brought up from St. Mary's to the new seat of government at Annapolis" (Wroth, op. cit. 13).

Printing by Handpress or by Hand
Education / Scholarship / Reading / Literacy