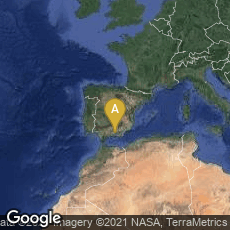 Image Source: upload.wikimedia.org
The Capitulation of Granada by Francisco Pradilla Ortiz.  In the painting Muhammad XII (Boabdil) surrenders to Ferdinand and Isabella.

On January 2, 1492 the Spanish Army under the command of the Catholic Monarchs Isabella I of Castile and Ferdinand II of Aragon, defeated the Nasrid dynasty's Emirate of Granada, the last remaining territory in Spain under Muslim control, thus ending all Islamic rule on the Iberian peninsula.

This represented the conclusion of the ten year Granada War, a series of seasonal military campaigns between 1482 and 1491, launched in spring and broken off in winter.

"The aftermath of war brought to an end coexistence between religions in the Iberian peninsula: Jews were forced to convert to Christianity or be exiled in 1492, and by 1501, all of Granada's Muslims were obliged to convert to Christianity, become slaves, or be exiled; by 1526 this prohibition spread to the rest of Spain. "New Christians" (conversos) came to be accused of crypto-Islam and crypto-Judaism.[2] Spain would go on to model its national aspirations as the guardian of Christianity and Catholicism....  (Wikipedia article on Granada War, accessed 9-2020).