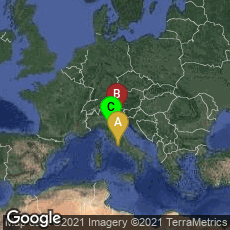 Origins of the Three-Period Framework of History: Ancient, Middle Ages, and Modern "Bruni's most notable work is History of the Florentine People, which has been called the first modern history book. Bruni was the first historian to write using the three-period view of history: Antiquity, Middle Ages, and Modern. The dates Bruni used to define the periods are not exactly what modern historians use today, but he laid the conceptual groundwork for a tripartite division of history. While it probably was not Bruni's intention to secularize history, the three period view of history is unquestionably secular and for that Bruni has been called the first modern historian. The foundation of Bruni's conception can be found with Petrarch, who distinguished the classical period from later cultural decline, or tenebrae (literally "darkness"). Bruni argued that Italy had revived in recent centuries and could therefore be described as entering a new age" (Wikipedia article on Leonardo Bruni, accessed 01-31-2013).

Bruni's Historiae florentini was first published in print by Jacobus Rubeus of Venice on February 12, 1476 in the Italian translation by Donatus Acciaiolus. ISTC No. ib01247000.  In January 2013 a digital facsimile of this edition was available from Bayerische Staatsbibliothek at this link.

Between 1439 and 1453 Flavio Biondo published Historiarum ab inclinatione Romanorum imperii (Decades of History from the Deterioration of the Roman Empire), a history of Europe in thirty-two books, from the plunder of Rome in 410 by the Visigoths, to contemporary Italy.

"As a historian he [Biondo] was the first to devise a general history of Italy, showing a continuity since the fifth century, and to conceive a 'media aetas' standing between Antiquity and his own times" (Weiss, The Renaissance Discovery of Classical Antiquity [1969] 66).

Like Bruni, Biondo used a three-period framework building up to the revival of Italy in his own time, breaking free of medieval constraints.

"The Decades embodies a model of historical writing recently established by Leonardo Bruni, notably in his Florentine History. Although Bruni was writing as offical historiographer of the city of Florence, his new concept of historiography can be characterized as more objective as it involved the exercise of critical judgment upon a variety of sources. Unlike Bruni, whose history of Florence involved a highly national view but one which is Florentine, not Italian, Biondo expanded the frame of reference and took in his Decades a national view of Italy. Whereas Bruni believed that decline started with the end of the Republic, Biondo originated the treatment of the medieval period as a historical epoch, and we still use his term. He developed the concept that decline began at the end of the Roman Empire. In Historiarum Decades Biondo intended to continue Italian history from the point 410 A.D., at which earlier writers had stopped. The scope of his history was the fall of empire and the ensuing disasters, as well as the origins and vicissitudes of modern peoples (partciuarly in Italy) down to his own time (1441). His history demonstrated as well the emerging awareness of modern Italy as distinct from its ancient past, as the Plinian sense of Italy as a geographical entity gives way to an utlimately political sense of Italian identity." (Catherine J. Castner, Biondo Flavio's Italia Illustrata. Text, Translation and Commentary, Vol.1: Northern Italy [2005] xxiii).

Biondo's work was first published in print by Octavianus Scotus of Venice, with additions by Johannes Antonius Campanus, on July 16, 1483. ISTC No. ib00698000.  A second edition with the additions of Pius II: Abbreviatio supra Decades Blondi was issued also in Venice by Thomas de Blavis, de Alexandria, 28 June 1484. (ISTC No. ib00699000). In January 2013 a digital facsimile of the 1484 edition was available from the University of Koelhn at this link.

Book History from 1000 to 1451
Histories & Historiography