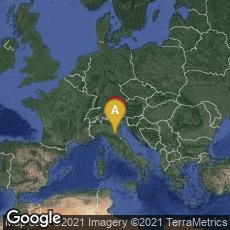 Page from the first book printed in Italy. Click on the image to see the entire image.

In 1927 a unique fragment of the Passione di Cristo printed in Italian was discovered by the Munich antiquarian bookseller Jacques Rosenthal. It was believed to have been printed in Northern Italy, perhaps in  Bologna or Ferrara, and possibly by printer Ulrich Han, about 1463. In January 2013 a digital facsimile of this fragment was available from the Princeton University Digital Library, which provided this commentary:

"The leaves apparently had been retrieved as waste material from some unidentified binding. As a complete work, it would have consisted of 17 leaves, printed with 16 full-page metalcut scenes of the life of Jesus from the entry into Jerusalem to the Last Judgment, each facing a page with a related printed prayer in Italian. The full set of metalcuts is preserved in a unique incunable in the State Library of Munich, being a German-language counterpart to the Italian fragment, printed with the type used also to print the unique Scheide copy of the Almanac calculated for Vienna, 1462. Other incomplete fragments of printed German versions of the prayerbook also survive. On various grounds, the distinguished incunabulist Konrad Haebler proposed that the Italian fragment had been printed in northern Italy, in the vicinity of Bologna and Ferrara, about 1463: two years or more before the traditional candidate as the first Italian incunable, the works of Lactantius printed at the ancient monastery of Subiaco (50 km east of Rome) by Conrad Sweynheym and Arnold Pannartz, 29 October 1465. The Passione di Cristo fragment was purchased by a learned New Orleans attorney, Edward Alexander Parsons, whose massive library was acquired by the University of Texas in 1958, but Parsons retained the Passione di Cristo, which remained within his family until its 1998 auction. Thus, for more than seventy years it was not available for scholarly investigation. When cataloguing the fragment for sale, Felix de Marez Oyens studied the two partially preserved watermarks, and determined that in terms of localization and date, they matched almost precisely what Haebler had hypothesized on other grounds. Because the Passione di Cristo follows the Munich German edition, Leiden Christi, page for page, the entire edition can be reconstructed. The first five leaves are missing. Of the remaining leaves, the six with printed text are fully preserved (fos. 6, 8, 10, 12, 14, 16). Of the six leaves with metalcut images, one (fo. 17) is preserved in full; one (fo. 7) preserves about of each of its two metalcuts; and four (fos. 9, 11, 13, 15) preserve only narrow vertical strips on which the inner margins of the metalcuts are visible. The strip of fo. 11 is so narrow that it has not been reproduced" (http://pudl.princeton.edu/objects/9880vr06v#page/1/mode/2up, accessed 01-31-2013).

The fragment was purchased by William H. Scheide for the Scheide Library at Princeton at Christie's sale of November 23, 1998, lot 18.