Woodcut of a printing shop by Jost Amman (1568). The printer on the left removes a page from the press while the one on the right inks the type. Printed sheets, having been dried, are piled in the foreground. Typesetters work at their cases in the background. A 15th century printing shop would not have appeared significantly different. 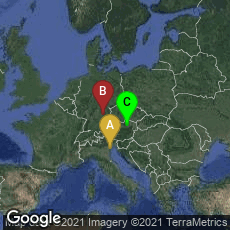 Scribes working in a medieval scriptorium, from a manuscript in the Biblioteca de San Lorenzo de El Escorial, Madrid, Spain, c. 1350. (Courtesy of medievalfragments.wordpress.com). A 15th century scriptorium would not have been significantly different in appearance or operation.

"In the decade before the invention of typographic printing, and then concurrently with the earliest years of European typography, the production of handwritten books increased considerably. One cause that has been proposed for this increase is the influence of German monastic reform movements, such as in Austria and south Germany, the Melk Congregation. However real and significant, this reason can provide only a local and partial explanation. The increase in bookmaking also occurred in other regions of Europe, notably Italy. The expansion of Europe's papermaking trade in the later fourteenth century and the first half of the fifteenth lowered the material cost of books for those who were happy to have them written on paper rather than parchment. Yet there remains some hiatus in the link between evidence and explanation.

"Whether we are to think of it as a cause or an effect, one feature of this increase has already been briefly mentioned: the growing number of less formal, 'self-written' books, of which the writer was also the intended reader. This broad phenomenon is examplifed in small by the Latin-German dictionary known as Vocabularius Ex quo, of which about 250 fifteenth-century manuscript copies have been listed, as well as nearly four dozen fifteenth-century typographic editions. A considerable number of the manuscripts, when complete, contain colophons whose writers record that at the time they were students in Basel, Kaufbeuren, Memmingen, Pforzheim, Stendal, Ulm, and so on. We may reasonably imagine that one of the common tasks of a German school student at a certain level was to transcribe for personal use a copy of Vocabularius Ex quo.

"Our best evidence for an increase in book making in this period comes from explicitly dated manuscripts, which is to say manuscripts whose scribes, for whatever varying reasons among a multiplicity of possibilities, felt the urge on finishing their tasks (or occasionally, on beginning them) to set down the date of the work. Because of the progress in recent decades of the Catalogue of Dated Manuscripts project of the Comité international de paléographie latine, we now possess a significant corpus of explicitly dated manuscripts of the fifteenth century, written in many different regions of Europe. From a global total of about 10,400 dated manuscripts of the fifteenth century, the totals for the successive five-year intervals bracketing and including this second period of fifteenth-century print-and bookmaking are as follows:

"Insofar as dated manuscripts are representative of fifteenth-century manuscripts overall, it thus appears that the two decades 1451-1470 mark a peak, with production almost two-thirds greater than that of the preceding interval, 1431-1450. In the next half-decade, 1471-75, there is a noticeable decline, and in the half decade after that the decline is very marked, the dated total for 1476-80 being less than that of 1436-1440.

"The striking decline in written book production in the 1470s correlates almost exactly with the strong increase in printed book production. A significant expansion of typographic printing occurred in the years 1469-1471, manifested both by the expansion of places of production—starting in 1469 with the introduction of typography to two cities that became dominant: Nuremberg, and even more preeminently, Venice—and by the increasing pace of production. To judge from physical survivals, both of integral copies and of binding-waste fragments, the surviving output of European printing shops from the early 1450s through 1469 is in the neighborhood of 325-350 editions. In 1470 to 1471, more than 400 new editions were sent to market, and in 1472 and 1473, nearly 800 more editions appeared. The rate of production 1474 and 1475 increased even further. In the crossing lines of book production in the 1470s—the handwritten variety on a descending curve, the typographic variety on an ascending—we have stronger than ordinary evidence for historical cause and effect. As the supply of printed copies of the most-used texts of literate Europe increased—copies for the most part of clear and strongly inked lettering and cheaper than commissioned scribal work—the need to create handwritten copies declined" (Paul Needham, "Prints in the Early Printing Shops," IN: Parshall (ed) The Woodcut in Fifteenth-Century Europe (Washington: National Gallery of Art, 2009) 41-42).